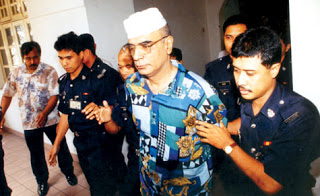 A large inscription on the rotunda of the Jefferson Memorial in Washington -- "I have sworn upon the altar of God eternal hostility against every form of tyranny upon the mind of man" -- impressed me deeply on my first visit to the United States as a student nearly a quarter of a century ago. Recently, with the tears of experience welling in my eyes, I revisited that site. My arbitrary arrest and torture in Malaysia had engraved Jefferson's inscription on my heart.

As a student I knew of the horrors of the Holocaust and other human tragedies, but merely as a distant thunder: The violation of human rights and crimes against humanity were only an abstract notion.

That was all fated to change with my arrest last year under the draconian Internal Security Act (ISA) of Malaysia, which allows for indefinite detention without trial. My crime? I had known Anwar Ibrahim, the deputy prime minister and finance minister of Malaysia, as a close personal friend for many years. We shared and strove for a vision of life firmly rooted in human dignity. We struggled for building an intellectual and political milieu for free expression. Together, we subscribed to the idea of economic prosperity, gender and racial equality and a civil society.

Alas, the Malaysian dictator, Mahathir, under the growing burden of corruption and cronyism, conspired to halt the march of freedom. In order to build his fraudulent case against Anwar, Mahathir himself ordered my arrest.

My kidnapping and detention by the infamous Malaysian Special Branch taught me how it feels to be forcibly separated from one's wife and children. How it feels to be searched and seized, disallowed to make phone calls, handcuffed, blindfolded, stripped naked, driven in an animal cage, shaven bald, endlessly interrogated, humiliated, drugged, deprived of sleep, physically abused. What it's like to be threatened, blackmailed, tormented by police lawyers, brutalized to make a totally false confession, hospitalized for a consequent heart ailment, and treated as a psychiatric patient with symptoms of Stockholm syndrome.

Barely surviving on a meager diet of rancid rice and chicken along with 12 medicines a day, I spent nearly four months handcuffed around the clock to my hospital bed, under the watchful eyes of the prison guards.