Pakatan Rakyat incorrectly put the crowd numbers at 100,000. Agree! There were more! Much much more! 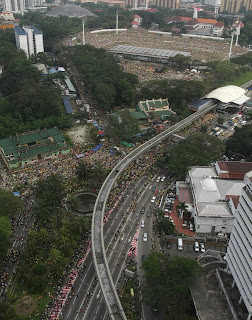 Its now 7.22 am over here – that means it’s 4.24 am in KL. According to my stats counter I have had 847 hits on steadyaku47 – most of it on my two postings about the Himpunan Kebangkitan Rakyat and all those hits happened between midnight and this morning.
That means our people want to know about what Pakatan Rakyat is doing and how the Rakyat responded to the situation. Allow me to put in my two cents worth.
I watched the whole HKR # KL 112 streamed live over the NET. I watched it on my son’s IPad and took notes with my iBook and posted my thoughts on the proceedings on my blog as soon as HKR # KL 112 ended. Then I monitored the postings from other blogs gathering as much information as I could about the reactions and other happenings from others who were closer to the actions and could filled me in on the things that I might have missed. I am sure this was what most of you were doing to!
By any definition, criteria or standard, the HKR #KL 112 on Saturday was an unqualified success and will make everybody sit up and take note that Pakatan Rakyat has definitely arrived politically. Any organization or political entity able to attract 100,000 to their rally or gathering will have a red light blinking on their head that tells it's rivals “WATCH ME!”
Barisan Nasional and UMNO can put any spin they like on this but they do so at the risk of making themselves into an Ass.  Knowing UMNO as we do, we know that will not bother them at all. They will just go ahead and make a fool of themselves anyway. That’s an ability they were born with and usually passed from father to son.
Sure enough - within hours of HKR’s ending we already had a posting on a blog (GO HERE TO MEET THE IDIOT) disputing the crowd numbers. See my reply here (CLICK HERE)
You and I know better. If we were not there we saw it all streamed live to us and we can count!
Okay lah Pakatan Rakyat incorrectly put the crowd numbers at 100,000. Agree!
There were more! Much much more!
If you put the crowd gathered OUTSIDE Merdeka Stadium because they could not get into Merdeka Stadium plus those of us who watched the HKR streamed live to us in Malaysia and Overseas (plus me in Melbourne!) we all know that the numbers will run into the millions…..truly worrying for UMNO and Barisan Nasional (and that is putting it mildly!)
I had a comment from some one who seems to know me but did not have the gumption to identify him or herself. It said:

Yes Dr. Latiff  - or Tok Tan as I call him, is my grandfather. He was the first Malay Doctor our country had and I am proud and honored to call him my grandfather! What I would like to ask of that person is this: In what way were we taught then?
To keep quite when our government rob us blind? To keep quite when there is corruption and money politics all around us? To be quite when we have a Prime Minister who will not clear himself of complicity in the murder of Altantuya? To accept PKFZ, NFC and all the murders by PDRM and MACC?
What I remembered of my Grandfather and my Grandmother was the way in which they brought up their own children – my Uncles and Aunties – all of them, without exception are good, decent people.
My father is one of them and I can only speak of my Father because I know him well. He was Director of CID when he retired. He was – according to people who have worked with him - not a ‘cari makan’ kind of guy. That alone is enough for me to know that he was clean and respected by his officers!
As for my Mother…words fail me. She was a good mother, a faithful and decent wife and in all her life, we (her children) were her main concern. True I may not be the paragon of virtue myself, but that is my choice in life. So please if you want to comment on what I do don’t bring Dr Latiff onto your side of the argument because you are unable to hantam me on your own!
And do as I do….you know me, you know my family and you know who my parents are. You on the other hand identify yourself as ‘anonymous!’ Why....... got no balls?
Sorry friends…just got carried away there!
As I have said at the start of this posting….what happened at HKR #KL 112 must really have shaken up this UMNO led Barisan Nasional government to the core! Let us see what sort of negative spin they can put on the whole thing. Rest assured that I and my brother blogggers will be ready to hantam them if they tipu us!
And now onwards to Putrajaya!
Posted by STEADYAKU47 at Sunday, January 13, 2013