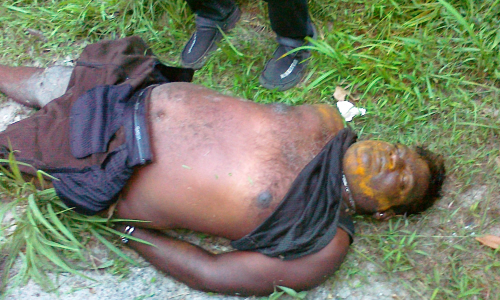 Today I hear again of another murder by our Polis Di Raja Malaysia of another suspect in custody - C SUGUMAR - another Indian helplessly beaten to death while handcuffed.
From the time I first read about it early this afternoon until now -  at 1.58 a.m early Saturday morning – images of Teoh Beng Hock, Kugan, Aminurasyid, Sarbani and of course Altantuya have been in my head. It will not go away no matter what I do. There is sadness when I think that all of them and many more have died way before their time. And yet what most of us do is to shrug our shoulders and tell ourselves that there is nothing we can do to stop the killing!
Can you try and do this for those who have died. I have uploaded three videos. The first is the murder of Kelly Thomas by Police Officers in America.
The second is of Andries Tatane murdered by the Police in South Africa.
And the third is of a horrific beating in Malaysia.
It was very hard for me to sit through these three videos because it is hard to imagine that one human could inflict so much hurt and cruelty on another – and do it with such brutality and callous disregard for the suffering of the those they are killing!
As I watched my sadness for those who have died while in the custody of PDRM and MACC reached deep into me – so gut wrenching were the emotions I felt that at times I had difficulty in drawing a breath. I was sad because all these people must have suffered much before they died. Much pain, much fear and so alone in their suffering.
After sadness came anger.
Anger that the Police and MACC are the perpetrator of these unspeakable deeds – and they do it for no other reason than because they can do as they like with these suspects, even murder, and more often than not, get away with it! If the IGP can have his way with Anwar Ibrahim, who is to say that they cannot have their ways with people in their custody?
Watch these three videos and you will start to have this anger within you that will grow as you ask yourself when will all this brutality stop? When will this BN government stop the killing?
Let the anger grow and keep the fire of rage burning within you because the dead cannot cry. We will cry for them.
It is now almost 3 a.m and I must to sleep –though I know I cannot.
Please watch every minute of these three videos – get angry  - keep the fire burning – go do something about that anger! ABU!

A horrific beating in Malaysia

ANATOMY OF MURDER! C4 YOURSELF!

It's happening again. And frighteningly so!

Even as the ghosts of Francis Udyappan, Kugan, Teoh Boon Hock, Altantuya, Ahmad Sarbani, R.Gunasegaran and 1,500 more who died while in the custody of various government authorities and police continue to haunt us, we have, within the space of a month, two more unexplained deaths - that of Cheah Chin Lee in Penang, and now, C.Sugumaran, in Selangor. Their death certificates say they died from cardiac (heart) arrest. But after Kugan's death where the government initiated post mortem missed 45 serious injuries, no one in Malaysia pays the slightest heed to them anymore.

In C.Sugumaran's case, we are left to ponder how the cardiac arrest cause of death verdict was delivered, after several eye-witnesses clearly saw him being handcuffed by police and assaulted by some 20 men, including some cops. 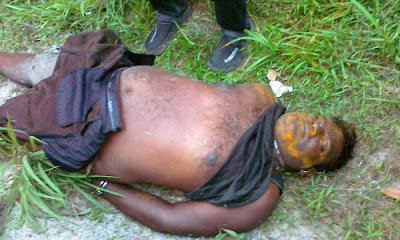 "More than 50 people protested at a police station here today the alleged police killing of a handcuffed security guard (C.Sugumaran).....Cops blasted for covering up 'turmeric murder' case...The lawyers also slammed Serdang Hospital - that they accused of having a “history of falsifying post-mortem findings in favour of the police authorities” - for attempting to prohibit them from accessing the victim’s remains.Yesterday, Serdang Hospital once again breached medical ethics by refusing to let Sugumar’s family see the body, on instructions from the police. The family were only allowed to see the body upon the insistence of lawyers and activists, after four hours of waiting. They cited how in the past the hospital had falsely claimed that A.Kugan died of water in the lungs when in fact he had been beaten to death in police custody. The Serdang pathologist Prof Dr Abdul Karim Tajuddin was subsequently found guilty by the Malaysian Medical Council (MMC) of professional misconduct for falsifying Kugan’s post-mortem findings. They said Sugumar’s family intends to lodge complaints against Serdang Hospital and its pathologists with the MMC. We also urge the Inspector-General of Police (IGP) to allow and facilitate the carrying out of a second post-mortem upon Sugumar’s remains. Until the second post-mortem is carried out satisfactorily, the family will not claim the body," the headlines and online news portals reports blaze.