Unfit to be Prime Minister....of any country!

steadyaku47 comment: I first posted this over two years ago.Nothing has changed with Najib - if anything he has exceeded his own low standards and is now digging himself into his own grave! 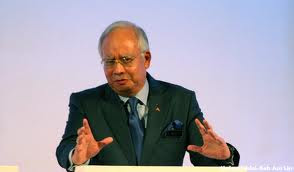 When I look at Najib, Muhyiddin, Mahathir, Ibrahim Ali - all those bombastic self-proclaimed Ketuanan Malay “leaders,” I do not think of Hang Tuah! Huh! All they remind me of are Field Marshall Idi Amin Dada, Mobutu Sese Seko, Robert Mugabe and His Excellency Benito Mussolini Head of Government, Duce of Fascism, and Founder of the Empire. Yes at one time or another they were all leaders of their people, all striding to the sound of brass bands and traveling around in motorcades flanked by armed guards. Leaders they might be but they were all totally oblivious to the look of contempt and disgust from the very masses that they consider themselves to be Lord and Master over. Totally oblivious of the massive harm they have done to the country they ruled. Totally oblivious to the crumbling ruins of their government because all they see are the trappings of power and their personal needs. Never the misery of the people they rule.

I want you all to understand this. When in power these kinds of leaders will do what they want. They would not investigate themselves. MACC, the AG, the Judiciary and PDRM (among other Government entities) are there to ensure that these leaders are given the means and leeway to do what they want. And what they want is to stay in power and make money for themselves and their cronies.

And who are the people who have been in charge in Malaysia? For 22 years of the last 30 years it has been this man call Tun Dr. Mahathir bin Mohamad. The fourth Prime Minister of Malaysia whose political career has lasted 40 years and still counting.

Just as Singapore has been shaped by one iconic man Lee Kuan Yew, Malaysia too has been shaped by one man, Mahathir……and therein lays a tale. Singapore is one of the world’s most prosperous countries with strong international trading links with per capita GDP equal to that of the leading nations of Western Europe. Malaysia has the most prosperous politicians and strong family links with these politicians will ensure that your personal capita GDP will be equal, if not better than that of many African Politicians with similar inclinations to rob their own country blind. Transparency International Corruption Perception Index of the past 16 years puts Malaysia as the worst country in Asia-Pacific. Malaysia is the 7th most corrupt nation in Asia. Corruption is common among the country's political and business class. Bribery and other corrupt practices pose major problems for companies operating in Malaysia. The business of government is equally corrupt. So while Singapore has taken the high road, Mahathir has taken the low road and he has, unfortunately, taken us along for the ride.

Now we have Najib Tun Razak. This man is unfit to be our leader. Unfit to be the Prime Minister of our country. He would have a hard time holding on to a position as Manager of any decent size organization where decency, honesty and integrity are required of its employees – as it should be of any individual holding a position of responsibility.

But in UMNO he thrives! He is their President! He can fool UMNO, he can fool the Attorney General of Malaysia, he can fool the IGP, he can fool the Cabinet (though one can argue that the closing of one eye and the shutting of the other has the same effect!) – but try as hard as he can, he will not fool us and of course he cannot fool his wife. After all it takes a thief to catch another thief…birds of a feather flocks together…get my drift?

Why is Najib unfit to be our Prime Minister? Let me count the ways…..

Hands down the tragic murder of Altantuya tops the list. Don’t ask me about it because I am bias. Go ask that Indian kachang putih seller, the Pak Chik selling satay by the roadside or that Chinese guy selling Yong Tau Foo at the market in Lucky Gardens each morning. Ask them about Najib and Altantuya. This is what they all say:

NAJIB IS GUILTY UNTIL AN INDEPENDENT JUDICIARY CLEARS HIM.

No need to swear in the mosque, no need to discredit Bala’s SD, no need to say that the murderers have already been caught, gone to trial and have been sentenced. The damming thing is this Najib – YOU know that WE know that YOU are involved somehow and somewhere in that sordid saga of the RM$500 million submarine commission for Razak Baginda and in the murder of Altantuya. Whether the facts are made known during your time, your children time or your children children’s time is to be seen. The truth shall prevail but you will not.
Under your watch MACC murdered Teoh Beng Hock while he was under their custody. PDRM bludgeon Kugan to death and shot Aminurasyid to death! All the king’s horses and all the king’s men could not put Humpty Dumpty together again. You Najib did not even try! A political police force? Is that what PDRM has become? Huh! If today PDRM has become a tool for the survival of UMNO and BN then be assured that after the 13th General Election the people will claim back PDRM and not leave it to be the force of evil that PDRM has now become but cleanse it to become once again a Force for good.

This is also the same Najib that made an offer of RM$5 Million to the people of Rejang Park during By-Election time to elect BN's Robert Lau. Truly a courageous (in politician lingo that means stupid!) and remarkable (in our lingo this also means stupid!) attempt by our Prime Minister to BUY a by-election. An enlightened electorate rejected his offer.


During Najib’s stint as Minister of Defense the procurement of arms and equipment became an ‘art form’ that impacted favorably on the financial well being of his and UMNO's cronies.

Eurocopter.
Ministry of Defense signed a Letter of Intent to acquire 12 Eurocopter EC725 Cougar helicopters for the sum of RM2.3 billion. Brazil paid only RM$1.2 billion for 50 units of the same mode.

Sukhoi Fighters. 18 Sukhoi Fighter Jets were bought for RM3.2 billion. A 12 percent commission of RM380 million was paid to its local agent IMT Defence Sdn Bhd whose Chairman was Adib Adam, former Chief Minister of Malacca. The same Malacca that once had an UMNO child molester as its Chief Minister.

Naval Patrol Boat. Ministry of Defense paid out RM4.26 billion to PSC-Naval Dockyard for only RM2.87 billion of work done. The Malaysian cabinet waived late penalties of RM214 million. 14 progressive payments amounting to RM943 million was paid out to PSC-Naval Dockyard without payment vouchers or relevant documents dealing with the payments. The technical incompetence of PSC-Naval Dockyard to undertake the contract can be confirmed by the fact that PSC had never built anything but trawlers and Police boats before being given the contract by Najib.

Any individual that is involved in any one of the above truly shameful straight out grab for the Rakyat's money would not be considered for employment at any reputable business entity. In Malaysia he becomes our Prime Minister! Camna ni? Does that not make him an unfit person to be Prime Minister of our country? I rest my case.
Posted by Hussein abdul Hamid at Wednesday, December 22, 2010
Posted by STEADYAKU47 at Wednesday, January 16, 2013