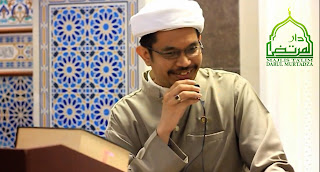 To keep this blog up-dated, we like to share this You Tube link sent to us from Mus, an old friend that we met more than 30 years ago at his home in Long Island, New York.

He was excited to introduce Dr Afifi Al Akiti, a student of the pondokfrom Perak that went on to study in several country under many great teachers and finally landed lecturing at Oxford. Although not widely known in Malaysia, Dr Afifi made significant achievement at his young age.

Perakian Mus was proud to highlight Dr Afifi as an example to dispel the stereotype labeling of "Melayu bodoh."

In the video, the young genius paid tribute to another Malay from the past he described as genius but was not sufficiently appreciated in Malaysia.

This is a tazkirah delivered by Dr. Afifi Al-Akiti at the 2013 Nasheed Extravaganza organised by the Malaysian Students at the University of Sheffield.

Dr. Afifi is the first Malay to hold a chair at the Faculty of Theology, University of Oxford.

Dr Afifi illustrated is a simple example that highlights a bad tendency of Melayu in power and authority to underestimate and downgrade Melayu. They would rather appreciate and revere foreigners and non Melayu.

Seldom do they realise that the ability, knowledge and experience in solutions to solve problems and ideas and visions to build nation and civilisation already exist within us.

Usually they lack appreciation for history and intellectualism. Such attitude is most prevalent amongst business and corporate men, yet they are given so much responsiblity and role by and in government.
Posted by STEADYAKU47 at Friday, November 08, 2013