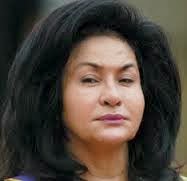 I have always suspect that Najib is an idiot …but I was not sure until this latest episode of him getting Cabinet approval so that his wife could use the government jet! He did so because he did not have the balls to say no to her ….....so he co-opted the Malaysian Cabinet into the whole sordid affair. So now if anybody questions why this lady is using the government jet…Najib will say…”Cabinet approved!” As they say genius will have its limit but idiots like Najib will always come up with something!

“Never argue with an idiot. They will drag you down to their level and beat you with experience.”
Sarah Cook

Whether Najib wears the pants in his house (he does not!) or he is queen control (he is!) has been debated by many:  From those having teh tarik and roti canai at the mamak stall in Bangsar to those rich and pretentious few who partake in  RM$220 three course dinner at the Shook! Restaurant but many of us are past caring if the high maintenance wife of our Prime Minister is a witch or a bitch.

Think back to the time when his father was Prime Minister and Toh Puan Rahah was the lady in residence. Toh Puan Rahah was a gracious lady who had to take her children to the Lake Club for swims because Tun Razak refused to have a swimming pool in the official residence of the Prime Minister because he was adamant that it would cost the nation too much to have one installed at his official residence.…and now we have her daughter–in–law shopping in Milan, Monaco and London! Huh!

I remember the late Kak Endon in the time that Abang Lah was DPM and PM – Endon is a formidable lady! She was not shy of telling you what she thought of anything that she liked or disliked and Abang Lah himself would rather steer clear of crossing her path when she has something she wants to do on her mind….but she had grace, she had dignity and she had respect for others.

And so did all the other wives of our Prime Minister. Each and everyone of our Prime Minister’s wife, Mahathir included, conducted themselves with the decorum and grace that Rosmah never had! None of them suffered delusion of grandeur to be Malaysia’s First Lady because good upbringing and good manners made them graciously give that title to the wife of our King. Yes I remembered that Endon had her personal staff to assist her in her duty as the Prime Minister’s wife but there was no talk about an office in the PMO…..and her focus was Penyayang and Batik…but not this Rosmah - she sufferrs from delusion of grandeur!

Confident is when you steel yourself to read from a prepared text at a gathering you are invited to address because your husband is the Prime Minister of Malaysia……….arrogance is assuming that the invitation is made to you in your own right.

Duty and service to your nation is when you accompany your husband to State dinners and trips overseas and sit through endless hours of polite conversation smiling with grace and poise. Arrogance is thinking that you are being invited to grace a function or International Conference because they really want you instead of the Prime Minister to grace the function.

Humility and a sense of your own self is when you understand protocol and your place in the scheme of things. Arrogance is anointing yourself FLOM.

The arrogance that Rosmah exudes reminds me of that man who thought as Menteri Besar and chief executive of his State it was his right to gift a civil servant with a broom to signify his disgust with the manner that civil servant had failed in his duty. He did so because he did not have the good sense to understand that there are other ways to encourage and reward how one performs at work. Would he now have the State government present him with a broom now that he has been convicted of corruption while performing his duty as Chief Executive of that state? Arrogance is abhorred by people and the perpetrator of that arrogance are rightly shunned by society.

Mussolini and Berlusconi falls into this catergory. It is not a place where right thinking people would want to find themselves in. But like idiots everywhere, those who are consigned to these catergory knows not that they are so consigned because like idiots they know not that they are idiots. As for Najib he must rue the day that fate brought him into the path of  this women who is now his wife. I guess the only reason Rosmah married Najib is because he was the only one stupid enough to propose to her!

As for Rosmah…this is all I can say….

“When a woman thinks her husband is a fool, her marriage is over. They may part in one year or ten; they may live together until death. But if she thinks he is a fool, she will not love him again.”
Philippa Gregory, The Other Queen

Tell me  Rosmah…do you not think that Najib is a fool? I do!