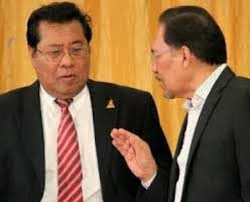 He said Anwar will be sitting at the state economic advisory council for the state’s economic stimulus package. The council was formed last April in to assist the state in implementing its the stimulus package which includes cleaning and developing the Klang River, urban renewal, restructuring of Selangor water industry, enhancement of paddy yield, reviving abandoned housing projects, expanding transportation system and reviving abandoned housing projects.

Later at a press conference, Tan Sri Abdul Khalid also said that Anwar will also play a key role in promoting Shah Alam as an Islamic investment hub for the region.

“I have met Anwar and he has consented to the appointment with a token monthly allowance of RM1. His experience cannot be doubted as he has been the Deputy Prime Ministe and Finance Minister. He is now a director for a fund management company in United States, an adviser for a large Islamic bank in Bahrain and economic adviser to a country in Europe,” said Tan Sri Abdul Khalid.

Selangor Mentri Besar Tan Sri Abdul Khalid Ibrahim's political secretary Faekah Husin clarified that the RM150,000 a year allocation was approved by the state treasury and not by the Mentri Besar's office.

"It is not true. The Selangor state did not pay RM 15 million to Anwar. If the15 million was approved the mentri besar and his officers would not be facing such pressure as we are experiencing now.

She reiterated that the RM150,000 a year for the state Economic Adviser was not paid by the menteri besar's office but Faekah did not elaborate on the 'pressure' faced by Khalid and his officers.

Khalid has also denied reports that he had issued a statement on his Economic Adviser's RM 15 million claims and allowances.

“The Menteri Besar’s Office never issued any statement on Anwar’s claims.  I am surprised how the issue came about, even saying it was posted on the state government official website," he was quoted as saying.

PKR Wanita chief, Zuraida Kamaruddin said she was not aware of the RM15 million allocation for Anwar. She said the allegations were libelous.

" As far as we are concerned, Anwar's paycheck is only RM1", she said when contacted.

Anwar, Azmin and several other PKR bigwigs had recently critised Khalid for being a stingy state leader who was more focused in increasing the state's cash reserves than serving the people.
Posted by STEADYAKU47 at Saturday, November 30, 2013