This evening I had writer's block...no can write nothing! Zilch, zero, kosong...elek!

writer's block
1.
the condition of being unable to think of what to write or how to proceed with writing.

And then my mobile rang! 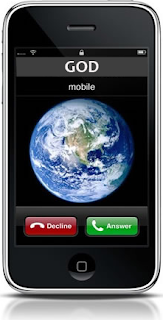 Yes it was God calling and HE wanted me to write!

I told HIM that from time to time I am prone to "writer's block" and this was one of those times!

I wanted to ask why HE did not have HIS own Mac but discretion is the better part of valor when dealing with those more powerful and more all knowing than you...so I did not! And anyway if I did ask HIM about HIS MAC I would also want to ask HIM about HIS power source, does HE prefer to use Firefox, Safari, Google or Yahoo etc etc.

I was still thinking about how HE was going to write through me but more worrying, how did HE get my mobile number - it is unlisted...but I guess HE does work in mysterious way.

I am a sceptical old fool who does not believe that any divine being would choose me to relay their message to the world but hey I did get that call...see my mobile above!

I guess those guys in Umno are not lying after all.

I mean they are all giving thanks and bersyukor that GOD have asked them to do this and to do that. Hell just last week HE made Zahid DPM! No lah GOD is no braggart. HE did not tell me that HE made Zahid a DPM. Zahid did. Zahid told us that he became DPM not because dia kaki ampu Najib. Neither was he anointed DPM by Rosmah.

Zahid said that GOD made him DPM.

So if GOD made Zahid DPM then I am sure HE has HIS reasons for getting in touch with me to write what HE wants me to write.

What, I asked, HIM respectfully, does HE wants me to write about...or should I say what does HE wants to write about? I was told in no uncertain terms that I was not to question why or what is to be written - whatever that flows from my PC is gospel and are HIS words.

By this time I was suitably impressed that it really was the divine being that was going to write. I was only the conduit of HIS thoughts.

And so I did just that and please understand that whatever is written here is from a divine being...not from steadyaku47.

GOD have had a few things on HIS mind these days and HE wanted to get a few things off HIS chest...so this is GOD speaking through my MAC! And HE told me that it will be a short session because there were other things HE had to do in other parts of the world. So here goes....from here it is HIS words not mine.

GOD Speaking:
I know that there will be some of you out there who are thinking that I am making all this up to hantam Najib, Umno and BN. I will not use the LORD's name in vain.For those of you who are non-believers please remember what happened to Kilroy.

Kilroy wrote on a wall "GOD is Dead : Kilroy"
He walks out of the building and is struck by lighting and dies.
The next day under "God is dead : Kilroy" was this message for the non believers:
"Kilroy is Dead. GOD!"

Please do not doubt what HE can and cannot do. You know what HE has done to Kilroy. Enough said.

NB : For those of you who say that I am being blasphemous and deserves to be labelled an infidel....let me remind them that I did not call GOD...HE called me.