It was the wedding of the summer. An Olympic gold medallist in ice dancing. A moustached aide to President Vladimir Putin. Pop stars and politicians gathered in Sochi, Russia's Olympic dream city on the sea. 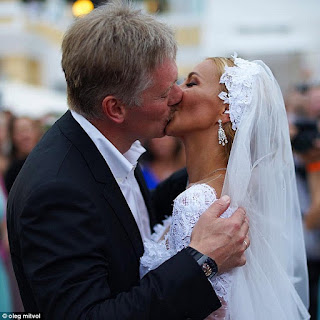 But as Dmitry Peskov, Putin's personal spokesman, wrapped his arms around the bride, his right sleeve rode up his arm, revealing an expensive timepiece decorated with a "red gold skull" and a $843,000 question: How did he afford that?
That was the question posed by Alexei Navalny, a former corruption whistleblower and opposition politician, who wrote in a blog post that the price of the watch was four times greater than Peskov's annual salary, according to official filings, and had never been declared as a gift.

Navalny identified the watch as a Richard Mille RM 52-01, a limited edition timepiece of which only 30 were made, and published a photograph of an email from a vendor who gave a price of $843,000 for the watch. 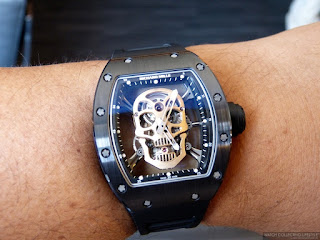 Peskov told the business newspaper RBC that the watch was a wedding gift from his wife, Tatiana Navka, and that he received it on Saturday, the day of the wedding.

"The watch is indeed very expensive," he said. "But it costs far less than some people have said."

As to where Navka found the money for the watch, Peskov said, "that does not concern anyone." Navka gave similar comments to Russian press.

There was just one wrinkle. Why, opposition bloggers asked, was Peskov wearing the same watch more than 15 weeks ago in a photograph posted by his daughter Yelizaveta on Instagram?
In a follow-up post on Monday, Navalny compiled photographs of Peskov wearing other luxury watches: an Omega, Hublot, and Rolex.

Peskov maintained the watch was a gift from his wife.

"I could not not wear a gift from my wife at our wedding," Peskov said.

Tabloids in Russia this year have lavished attention on Russian bureaucrats and politicians, publishing interviews with their wives and carefully manicured photoshoots with their families. In just the past year, the Russian edition of Tatler has run interviews with both Peskov's ex-wife and his future wife.

"To be honest, I did not like him at first," Navka told the Russian edition of Tatler. "But he did a good job. He got me through elegance and perseverance."

Watch scandals are nothing new for Russia, where an opposition group in 2012 published a video composed of photographs of Russian officials -- including President Putin -- wearing expensive watches.

But the most famous scandal involved Patriarch Kirill, the head of the Russian Orthodox Church, who was wearing a $30,000 gold Breguet in a 2012 meeting that was later edited out of the image by his press service. Bloggers noticed the reflection of the watch in a wooden table.
The Orthodox Church later apologised and published an unedited version of the photograph.

Oleg Mitvol, the Moscow city official who first posted the photograph of Peskov and Navka, may win for the most creative explanation to the scandal, even if his words contradict everyone else involved.

"Peskov knew that he would be photographed during the wedding and that the pictures would fly across the internet..." he told a Moscow daily newspaper.

"And in this case the young couple decided to make a joke. Peskov borrowed the watch from one of his friends at the wedding. He posed with it. We waited for journalists to respond to this canard. And we were right. The next day everyone started tallying how much the watch costs and how a bureaucrat could allow himself such a luxury on his modest salary?"
Isn't that everyone's idea of fun?