Have YOU joined the Mile High Club?

If you didn't already know about Miranda's confession then you're about to discover a whole different side to the Australian beauty. Speaking to GQ she admitted to being a member with ex-husband Orlando Bloom: "Sort of. Let's put it this way, I've had an orgasm in the air before. Alone. And together." Bravo.

There's nothing worse than preparing yourself for a long-distance flight, only to discover you've either already watched the movies or hate the entire cast. So fair play to blonde bombshell Carmen who created her own in-flight entertainment with then-boyf Dave Navarro in 2003. “We worked it out that I would go in first, and Dave would come along after and give a secret knock. Then I let him in and, well, the rest is history," she spilled.

It's not just her nipple slip that's a bit risqué about Miss Jackson. In 2006 she was playing the 20 Questions game and inadvertently blabbed about getting down to business with Jermaine Dupri on a commercial flight. And what's even more incredible is the pair didn't even leave their seats! 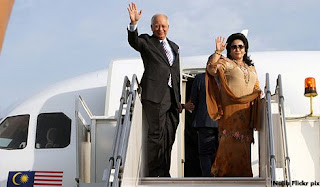 This jet setting (on our jet, on our money and on our time) couple were on another of their many all expenses paid OGSST (On Government Service Shopping Trip) to Milan when they too joined the Mile High Club - separately. He by himself at the 5th mile and she by herself at the 10th mile. Malaysia Boleh!
Posted by STEADYAKU47 at Monday, August 10, 2015