Everyday in many ways this moronic Prime Minister of ours, his Ministers, that Twit of an IGP  and many others whose snout are parked in and around the gravy trough that Najib keeps topping up from his embarrassments of donations, keeps telling us to behave.

They tell us not to destabilize the security of our nation. They tells us that that we must cease and desists from working towards toppling the duly elected democratic BN government.

What my friends and I are saying to Najib and his cohorts is simply this :

Today we are all together as one in showing our collective middle finger to Najib and all those fat bloated pigs who have their snouts in that gravy train that Najib keeps topping up. 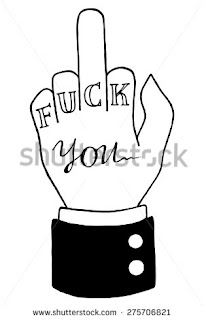 
For a start they can't arrest everyone of us. They cannot stop the people from waking up from the nightmare of having their country ravaged, plundered and shamed by the antics of Najib and Rosmah. We are all awake now and we will not want to sleep through any more certain nightmare that is Najib and Rosmah. They two must go!

Three million members, a majority in Parliament, a vast network of tried and tested rank and file that have kept the party in power for over half a century and so many honest and committed Malay leaders who have given much to that party in the name of the Malays, Islam and the nation...all that is needed for a political party to govern Malaysia well, Umno already has!

All the president of Umno has to do to be a good and decent prime minister of Malaysia is not be an incompetent moron! Three million members and they had to choose that village idiot and incompetent moron from Pekan for their president! 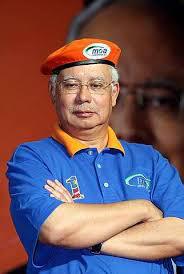 Its time that Najib realizes that even the Umno natives are getting restless!

Today everyday one is asked : Which side of the divide are you now standing on? With Najib or against Najib. Are you with us or against us?

As our anger grows by the day against these two sad excuses of the human race, religion and politics seems to matter less and less. What matters is how soon can we can rid ourselves of this couple in Seri Perdana before they will drag us into the abyss of greed, arrogance and odium that they are already in?

The question now is ...which side will prevail? Which side has the numbers? Who will eventually prevail and win.

For me right will always prevail against wrong. Good against evil. The rule of law over chaos and mayhem. Truth over lies. Honesty over lies.

A leader unites a nation not divide it.

Najib divides us!
Race, religion, politics no longer matters. The people know that unity against Najib is necessary if their nation is to survive. Once before our people came together to face a common threat from without. This was what happened during those Konfrontasi days - when our now good friend was then our mortal enemy.

Today our enemy is from within our own ranks.

Every day in every way Najib digs himself deeper into an early political grave.

The Rakyat are prepared to place their hopes and aspiration, dreams on just about anyone....anyone is better than that certain nightmare of Najib and Rosmah!

Najib is a bull in a china shop. What he has done is dishonest. It makes us question his integrity. It is simply not right.

I can only write my anger against these two here....what will you do? I am one. With you we are two. Who else will join us?