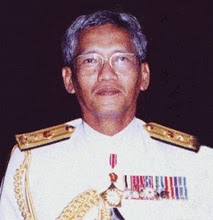 Friends has been calling me to ask why have I been so angry of late, and my anger is so obviously reflected in my comment on FB. I said to them that I am so confused and angry because at this late age of mine, I am seeing the demise of my country in the hands of some ugly politicians who now lords even over the civil service.

Having been a member of the Armed Forces, and had served towards the final days of the Indonesian Confrontation, the full brunt of the Communist Insurgency and had seen service with the UN on peace keeping duties in war torn Cambodia, I just cannot hold back my anger to witness this beloved country of mine that I had placed my life as a soldier defending it, be mercilessly mowed down by thieves, liars and even alleged murderers, masking themselves as honourable politicians.

The more I read about what appears to my beloved country grasping for breath in the face eventual death, I flinch in fear that all the scarifices that we the members of the Armed Forces had contributed in the past to make this country safe so that it could prosper for the good of its people, is being mismanaged at the hands of unscrupulous, thieving, corrupt and lying politicians.

Never have I hated our ruling politicians so much like this in the past, and seeing them act like lord and master over the people today, makes me change my honourable impression of them to one of despise, intense dislike and disrespect for them all. What is even worse is their utter disregard to their sworn pledge to His Royal Highness the King, especially those appointed to hold ministerial positions in government, to serve the nation with honour, and to fulfill their avowed responsibilities with integrity and thrustworthiness. Never have they pledge to steal and abuse their position.

I really do not know if my country could survive the current turmoil caused by an idiotic leader who has shown little remose for the sufferings of its people. What more can I do now to enlightened my poor soul, other than to pray for the blessings and guidance from Allah swt that my country and its people will emerge out safe from the current turmoil.

Finally, I seek my beloved and faithful FB followers to join me in prayers that nothing untoward will befall upon us all, and that we shall continue to savour the joy and happiness that we were once showered with. Amin.
Posted by STEADYAKU47 at Saturday, August 08, 2015