If one looks stupid, talks stupid, acts and insists on keeping oneself always in the "stupid zone" what other inference can we have but that he really must be stupid? Yes I am talking about Ahmad Maslan....before him there was Samy Velu and then Bung Moktar Radin and a few others not worth mentioning...and then along comes a worthy contender to the "Bukan bodoh tapi kurang Cerdik!" title...Ahmad Maslan! 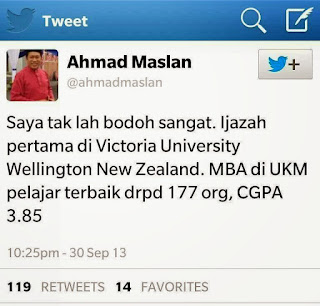 "education does not equal intelligence. Intelligent people will always be educated, be it formally or informally, but educated people can never acquire intelligence if they don’t have intelligence from the get-go".
H.R. 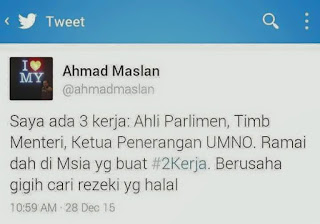 Local comedian Harith Iskander also appeared to take a dig at Ahmad, posting via Facebook and Twitter that although he was a known as an emcee, writer and actor, among others, it did not mean he held so many jobs.

“I am a comedian, emcee, writer, actor, coach, director. That does NOT mean I have 6 jobs. It means I do 6 different things. In the context of a government servant you could say I hold 6 different posts.

“A job is something you do every day all day. So for a person to have TWO jobs that would mean they work minimum 2 x 8 hour shifts a day. That’s 16 working hours. A day,” he said. –

So move aside Samy Velu and Bung Moktar Radin....Ahmad Maslan has arrived! By popular demand and acclaim we hereby crowned this idiot as the first among equals of many bloody idiots within BN who also happens to be an Ahli Parliamen, Timbalan Menteri and Ketua Penerangan Umno.

And of course Umno always has a hand in giving us such an Idiot!