Melayu Lawan Cina? Let us not be distracted by race or religion. Do not let the blood of our own people be the result of politically driven agendas that pits the Malays against the Chinese for the benefit of Umno leaders who are desperate to cling on to political power.


KUALA LUMPUR: A brawl between a group of dissatisfied customers and several handphone sellers this evening forced the Kota Raya shopping complex to pull down its shutters early.
It is learnt that the 4.30pm incident occurred when several customers, backed by a non-government organisation, went to the complex to seek a refund from several sellers who had allegedly cheated them.
A representative of the group Roslan Ismail told Harian Metro that a heated argument started when one of the business operators behaved rudely and tried to chase them out.

A brawl between a group of dissatisfied customers and several hand phone sellers this evening forced the Kota Raya shopping complex to pull down its shutters early. Pix by Aizuddin Saad

"We came here to help the cheated customers, and not to create any trouble.
"But chaos ensued when one of the sellers acted rudely. He even tried to chase us away," he said.
Roslan claimed that so far, only one of the victims had managed to get a refund.
He said there are many other victims, and they will continue to seek justice for them.

Let us first get things into perspective. What happened at Kota Raya is a brawl between a group of dissatisfied Malay customers and several Chinese hand phone sellers which forced the Kota Raya shopping complex to pull down its shutters early.

The facts of the matter is immaterial!

If it was not about hand phones it will be about Islam and Christianity, about the DAP and Umno, about the Malays losing their "maruah" or dignity because the Chinese are not grateful for all the sacrifices of the Malays in giving them right of abode many years ago when we first became Merdeka....or it will be about the Chinese not respecting the rights of the Bumiputras to do this or do that....it can be about the seizure of a deceased "declared a Muslim" from their love ones who are non-Muslims for a Muslim burial, it can be about the Hindus being disrespected by Malays trodding upon a cow head considered sacred by them or as we have seen at Memali it can be about Malays killing Malays because of politics.

Nobody is safe from these "attacks" on their personal self, their families or their religion.

Not even an ex Deputy Prime Minister who was beaten up by the IGP because the IGP acted with impunity without regard for the rule of law and common decency presuming that under the Umno led government then led by Mahathir, he would be commended not condemned for what he did to Anwar Ibrahim!

So you see my friends the Malays, the Chinese the Indians or any other Malaysians can be the victims of these kind of inane racially, religiously or politically motivated abuse, persecution and attacks that can not only caused bodily harmed but even death! 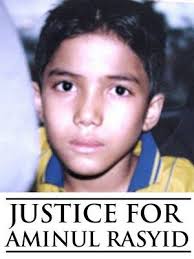 Yes death....remember Kugan, Teoh Beng Hock and Aminulrasyid? And do not forget the these atrocities are perpetrated upon Malaysians without gender bias! 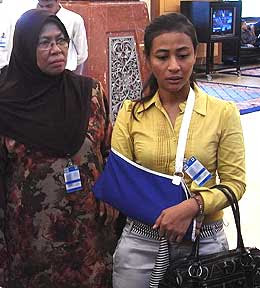 Remember the unarmed Norizan Salleh who was shot five times by the police? Two shots hit her arm and wrist, another hit her chest, causing uncontrollable bleeding. As she crawled out of the car, unarmed and pleading for help, she was kicked and stomped on by the police until her rib cages broke!

These are the realities we live with today! Nobody...no one can feel safe.

This Umno led Barisan National Government and the government agencies and authorities under its instructions not only condone these kind of attacks and persecution upon Malaysians but this Umno led BN government is the source and reason for these kind of inane, politically, racially and religiously motivated attacks because they intend to divide and rule and weaken our people through these contemptable and odious means. And the actions of their leaders, from the prime minister down - contribute, condone and encouraged these kind behavior by PDRM, the religious authorities and any other agencies and authorities under the instructions of this Umno led BN government. They are nothing more than a bunch of bullies, thugs and robbers who physically intimidate its own Rakyat while robbing them blind at the same time.

For those of us who have seen our country already brought to its knees from the excesses of this odious Umno led BN government, what happened at Kota Raya is merely another page of what Najib Razak and his bunch of thugs and robbers intend to deliberately do to our nation - divide and rule our nation in order to continue their plundering and pillaging of it.

Kota Raya, MARA Digital, Bauxite Mining in Kuantan, an IGP who sees nothing wrong in his officers attending anti-Christian seminars, a prime minister who pockets a RM2.6 billion donation meant for Umno.....all these are merely manifestations of this "Najib Razak led BN government" disease which can prove terminal to you and me if we do not say "enough is enough!".

Let us not be distracted by race or religion!

If a customer was cheated at Kota Raya then let the relevant government authorities deal with it. If the government wants to help Malays with MARA Digital then let it be a commercial driven exercise to help the Malays and not to win political points for Umno.

Do not let the blood of our own people be the result of politically driven agendas that pits the Malays against the Chinese for the benefit of Umno leaders who are desperate to cling on to political power.