Sharing your Fortune...cara Umno! Now all we need is for one of those Mufti's (preferably the one who made that ruling about the couple on the camel - nudge nudge wink wink....!) to pass a Fatwa that confirms that sharing your fortune is the "Islamic way" to do politics in Malaysia just as long as it does not interfere with what that couple are doing on top of the galloping Camel. 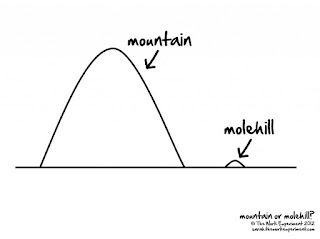 Her president gave RM1 million to Sharir Samad...now if Shahanim kasi RM$150 apa problem? I am sure that the RM$50 that she gave out to a her supporters is more generous that the RM 1million that Najib gave to Sharir  - if you count it as a percentage of their net worth! Though of course I do not know Shahanim punya net worth tapi Senator mesti tak kaya macham president Umno kan? So in reality I think Sharir has ground to complain to his president about that RM1 million being his share of Najib's fortune! He should get more ma!

Though of course it goes without saying that you must have a "fortune" first before you share it with others....can anyone tell us what is Shahanim's fortune is worth?

Now what happens if one of those Heavenly King in Bukit Bintang wants to donate part of their sizable fortune from drugs, crime and prostitution to PDRM?  After all there are already some individuals in PDRM who are drawing a sizable monthly retainer from prostitution.....so why not that Heavenly King donate a few million to PDRM?

Now where can that Heavenly King deposit the money? Police Cooperative, some Charity Tabung in PDRM? ....Or why not into that "tweet of an IGP" personal account and just let the IGP decide who deserve a share of that fortune with a caveat that that "tweet of an IGP" should not spend that money on giving out smartphones to his officers so that they can tweet some more!!

This can then be replicated through out the various government departments - all "donations" can be directed towards the private accounts of KSU's....though there might be some problems as to whether it is the Minister or the KSU's that is the "go to person" when it comes to tenders and contracts! Maybe any donations under RM1 million should go into the private account of the KSU's and above that to the Ministers...though the political secretary might dispute that! After all he is the gatekeeper to the KSU's and his Monster...err I mean Minister...so he might want all the donations to be deposited into his personal account for him to share with his Minister or anyone else he deems deserving in sharing his fortune. ...or he may want to keep it all to himself! Whatever lah! He decides!

So please lah ...don't make mountains out of a molehill. What Shahanim is doing is SOP in Umno (standard operating procedure) for those who wants to share their "fortune" with others!

Now all we need is for one of those Mufti's (preferably the one who made that ruling about the couple on the camel - nudge nudge wink wink....!) to pass a Fatwa that confirms that sharing your fortune is the "Islamic way" to do politics in Malaysia just as long as it does not interfere with what that couple are doing in top of the Camel.

And the icing on the cake is for Jakim or Jakun or whatever those religious departments are called (I know what I call them but I will be tarred and feathered if I mention what I call them) ...for Jakim to certify that "sharing fortunes" is HALAL!