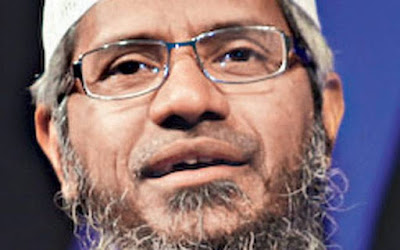 MUMBAI: Was the controversial preacher a part of the hawala racket being masterminded from Karachi?
Security agencies monitoring Karachi-based businessmen close to D-Company and a `terror outfit masquerading as charitable and social organisation' for funding Mumbai-based IRF.
Three days after controversial preacher Zakir Naik's chief financial officer Aamir Gazdar was arrested+ by the Enforcement Directorate (ED) for allegedmoney laundering+ , the trail has led the sleuths to Pakistan and the D-Company. In what could turn out to be a massive hawala racket in India, the ED is probing a few businessmen in Karachi, known to be close to Dawood, who have purportedly "moved" large amounts of money into Naik's Islamic Research Foundation (IRF) accounts.
Despite repeated attempts, Naik and the IRF officials remained unavailable for comment, even as the ED officials said a spate of offshore money transactions from Pakistan, and also Dubai, was overseen by Gazdar, and that there was a definite attempt to hide the sources of funding.
"A closely coordinated investigation is on to conclusively find out whether linked with a Pakistan-based terror outfit masquerading as social workers' organisation, and businessmen close to Dawood Ibrahim have moved funds to Naik's NGO," a high-ranking ED official said. Money, the official said, was also illegally routed to the IRF from Saudi Arabia, UK, and a few smaller African countries.
Officers from both the ED and the Intelligence Bureau (IB) said a hawala dealer from Pakistan-occupied Kashmir, identified as Sultan Ahmed, acted as an intermediary. "Sultan Ahmed met with Zakir Naik in Dubai in 2012, and since then, Naik started receiving funding from several sources in the UK and a few African countries. There is a strong suspicion that some people connected to the D-Company have been routing this money into his NGO," an IB source said.
A senior IB officer said conclusive details are yet to emerge from the probe, but Naik appears to have "contacts and financial interests" in Pakistan. "The probe is open at this stage," he said.
Posted by STEADYAKU47 at Monday, February 20, 2017