We live in momentous times. I was 10 when Merdeka came in 1957. Not much that I can remember of those times. May 13 1969 saw me in London. Not studying but more interested in what races the legendary jockey Lester Piggot had at Epsom Downs on that weekend. When Tun Razak died I was in KL and grieved with the nation at the passing of a much respected and loved leader. Under Hussein Onn what I remembered most was the conviction of Harun Idris for corruption. There were anxious moments when Heron was about to be arrested – the question arose as to what was Hussein Onn doing in going after a Malay leader of that stature? But to Hussein Onn that was never an issue. Harun Idris was corrupt and his conviction confirmed that Hussein Onn did the right thing.


With Mahathir I was under the impression (wrongly as I know it now!) that all was well until 1989 when he removed Anwar as his deputy. I was in Perth then. I came back to KL when Pak Lah became PM and left before Najib took over.

And now we are in August 2010. Since Najib took over it has been like riding a roller coaster that has yet to end. Everyday seems to be the dawn of a new horror – for him not me! Every morning I would power my PC and wonder what would happen that day…and the extraordinary thing was that every day something audacious would actually happened. I though that after Altantuya and Perak what else could happen? Kugan did. Teoh Beng Hock did…and then Sodomy Two with Saiful and Anwar…which just goes to show what momentous times we live in because history was being made every day!

These amazing 14 months since he took office will be long remembered as an era never before been seen in the history of our country. The farce and theatre revolving around this Prime Minister and his First lady would be comical had he been Prime Minister of one of the tin pot alley African states – instead it is our own country that he is Prime Minister off! And just when we think it simply could not get any worse…  “Everybody guessed wrong!”…And this is indeed a world-class humdinger!

KUALA LUMPUR: An area four times the size of Singapore is set to form Greater KL, which will be transformed into a leading global city over 10 years.
Greater KL will be a sprawling livable city and economic hub of 10 municipalities, more open space, improved waterfronts and superior public transportation system, possibly with underground trains.

“It may also build an underground train system.” 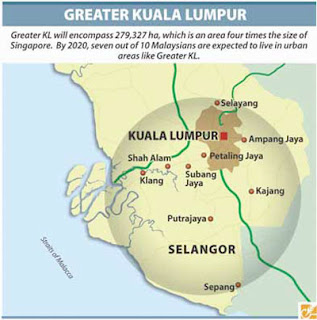 Right now they have the current KL, a quarter of what it will be in ten years time. Over fifty years after Merdeka KL has a public transportation system that not only does not work but also is too costly. Horrendous traffic jams occurring on a daily basis which slows to a snail pace if not to a complete stop during any heavy rain. Any vehicle breakdown, infrastructure failure or any occurrence out of the ordinary (like the closing of a road for any VIP use) will throw the whole traffic system into chaotic meltdown. Roads too small, too crowded and costing the public too much in tolls.

And they have the audacity to talk about an underground train system? An efficient solid waste management system? A population of 7.2 million? Ten municipalities? Transforming KL into a leading global city in ten years time…and the transformation process will drive the economy and improve the quality of life! Huh?

And if that was not enough it will help the country reap RM115 billion a year in income over the next ten years! And of course there is that subtle reference to Greater London and Greater Toronto area just for good measure.

Who do they think we are? Stupid idiots? Just look at Putrajaya. No I am not talking about the sterile planned city which is the Federal Administrative centre of Malaysia. Look at KLIA, KLCC even when KL became the Federal Capital. Somebody somewhere made tons of money by being the “Go To Guy” if you want any action on these projects. Money is already being made on the Sungei Besi Air Base and the Sungai Buloh Rubber Reserch land. And now with this announcement of Greater KL you can just imagine these cronies will start to salivate at the prospect of making real money very soon.

Najib’s architect brother must already be taking in new staff and possible bigger office space –after all there is at least ten years work there. This Nor Mohamed must already be placing his ‘boys’ in the right place – as he did when he was Minister of Finance – so that these ‘boys’ can maximize Nor Mohamed financial gain through the Economic Planning Unit!

Underground train system? Well Razak Baginda set up his commission infrastructure in less then a month. Anybody thinking about putting a proposal for the Underground train System better not waste your time. They already have the preliminary proposals that indicate that it is feasible and financially viable –like the LRT, PKFZ and Bakun. The same with the efficient waste management system! Study trips have been undertaken and proposals for an “efficient” waste management system already made complete with ‘indications’ of costs.

What a load of rubbish! I suggest you just go an invade Singapore and take over the Island lock stock and barrel. Not only would it be cheaper but also with any luck we will lose and the USA will come to our rescue and initiate a program for rebuilding and creating a stronger economic foundation for our country similar to the Marshall Plan of 1947-51 – Free of Charge!

This was one of my proposals posted on Sunday March 8, 2009 in my blog:

“Down the list of "proposals" under consideration is one that proposes the relocation of Kuala Lumpur to Klang, It is logical because not only will it eliminate the horrendous traffic jams and flooding problems that KL has, it will simultaneously end the Federal Highway daily crawl. The Ancient Mariner will also agree that with KL in Klang the Port will be utilized to its maximum capacity and the proliferation of Water Sports around the Selangor Yatch Club vicinity be a boom to the locals.  Of course with the invasion of Singapore already in progress this sensible relocation of KL to Klang might have to be deferred to a more prudent time frame - possibly by January 2010 but the search for another "TUN" to head this lucrative undertaking will commence without delay. Amen”.

But I would think that the invasion of Singapore takes precedence!
Posted by STEADYAKU47 at Monday, August 16, 2010