PKR man a coward, says top cop
SUBANG JAYA: Inspector-General of Police Tan Sri Musa Hassan yesterday branded PKR politician M.S. Arjunan a coward for not cooperating with the police.
The nation’s top cop said the Taman Ehsan Tasek (Perak) PKR branch chief should be brave enough to reveal the evidence he claimed to have against Deputy Federal Territories and Urban Wellbeing Minister Datuk M. Saravanan.   Musa said police could take action against Arjunan for withholding evidence.
“He is brave only when talking about it with the media, but when it comes to facing the police, he is afraid and does not want to cooperate.
“There must be something wrong with him. It is hard for police to investigate the allegations without the evidence.”   Arjunan had lodged a report against Saravanan on Saturday, claiming he had received a letter detailing the MIC man’s alleged involvement in supplying college girls to Datuks and Tan Sris for sex. 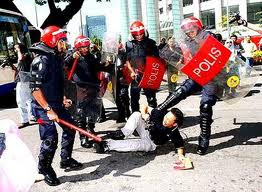 Musa I do not know whom this M.S. Arjunan. But this I know. The Police have time and time again been proven to have murder…yes murder…people who are in their custody.
Custody: A seizure or forcible restraint; an exercise of the power to deprive a person of his or her liberty; the taking or keeping of a person in custody by legal authority, especially, in response to a criminal charge.
Yes you are the legal authority to take a suspect into custody. But murder? Police murder? Where in a civilized society is this allowed? Not once, not twice but countless of times. This is what they do in Australia for a death in custody:
THE family of an Aboriginal elder who died of heat-stroke in a prison transfer van have been awarded a $3.2 million ex-gratia payment by the State Government.
Mr Ward, an elder whose full name cannot be used for cultural reasons, died in the back of the van on the way from Laverton to Kalgoorlie in WA's Goldfields region in January 2008.
Attorney General Christian Porter today announced that the $3 million payout would be given to Mr Ward's immediate family on top of the $200,000 interim payment given previously.
We are still waiting to know what happened to Kugan – murdered over 18 months ago! 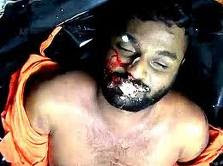 And do you remember your men shooting the 15-year Aminunrsayid. Ini anak orang Melayu! So your officers cannot give the reason as “ethnic cleansing!”…...as they all like to joke amongst themselves after shooting Chinese or Indians in shootouts where the victims are hopelessly outnumbered in numbers and weaponry. 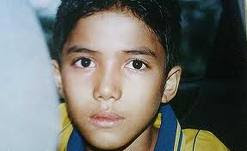 Did your predecessor not beat him black and blue? And did not your predecessor had to be forcibly pulled away from Anwar to prevent him from doing any more harm to this former Deputy Prime Minister of ours? And you tell this M.S. Arjunan to not be afraid? Tell me Musa if you can do so much damage to a former deputy Prime Minister what damage can you inflict on an opposition politician?
Jesus Christ Musa are you stupid? We are all frightened of the Police! You steal from us in broad daylight. You make money from prostitution. You beat our people at the slightest provocation. You do all this and you ask for our cooperation? You really must be stupid or simply a nincompoop unable to understand how an ordinary human being would react when confronted with the possibility of being beaten to death or close to death! And you are the Inspector General of Police?
I remember a time during my father’s tenure as Director of CID, under Tun Haniff when the Police were people we could go to for help. When the police were there to protect the citizens of this country. When the Police were people we respected and we could depend in times of trouble. No more. No more are the police anything to us but scums and thugs who are legally allowed to bully the citizens of this country. You are indeed the head of these bullies.
I have two words for you. The first letter of the first word starts with and ‘F’.