What will Malaysian do against the threat of a rogue government indulging in rampart acts of economic plunder and indiscriminate acts of murder and physical violence against its own people? How do we rein in Ministers who do not take personal responsibility for abuses committed in their government ministries? What about those political leaders who do not treat their electorates with respect, dignity and do no work for the very people that elected them?

And yet I want to tell UMNO that I am not their enemy! I never was. What I reject is what UMNO has become.

I reject Malays who regard themselves as UMNO elites because by doing so they display the true character of the worse of human kind – vanity, pride and arrogance.

I reject those Malay in UMNO who are dismissive of other Malays who hold different opinions or view point from them. It is when one are too sure and arrogant in one's view point that one is most mistaken. 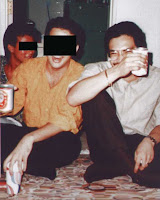 I reject those Malays who because of their lineage act with pride, vanity, ostentation and arrogance to others. And consider their have a right to the position their Father once had in UMNO or in Government.
I reject the little Napoleons and big Napoleons...any Napoleons at all within UMNO who so amusingly declare themselves the champions of us Malays and consider every little thing they do for the Malays as being our salvation – whether it is or it isn’t.

I reject the insufferable arrogance of UMNO leaders who think that we Malays need to be spoon fed, are weak in all things commercial and have need to be protected from the bullying of other races – when we know these protections was only used for the furtherance of UMNO’s interest, not the Malays. 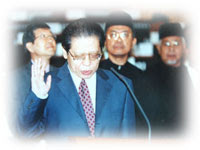 I reject UMNO’s assertion that Pakatan Rakyat does not have the Malays interest at heart simply because some of their leaders are named Lim Kit Siang, Karpal Singh and Lim Guan Eng. I would rather have the honest arrogance of the Pakatan Rakyat leader who knows that they will form a better government then what we have now in the hypocritical humility of Najib, Muhyiddin or Din who pay lip service to the 1 Malaysia concept but work against all that it represents in the things they do to the Malaysian people.

I reject the Muslims leaders who are in UMNO. The Muslims in UMNO and Islam have nothing in common.  Islam preaches love, humility and respect for others. The Muslims within UMNO are greedy, corrupt, and arrogant and belittle the poor and the disadvantage of our country. I reject UMNO hypocrisy and pretension to be the paragons of Islam when their leaders are the worse offenders of that faith.

I reject the presumption by UMNO that the people of this country opposed to what UMNO represents can be intimidated into submission by brute force – whether through PDRM or the ISA. 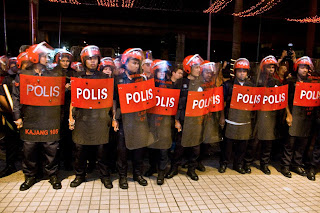 I reject a Prime Minister that refuses to submit himself to the rule of law.

I reject the UMNO assertion that the government knows what is best for the people when time and time again that excuse is used to hide from the people the abuses of government funds, the award of contracts that are financially advantageous to those whom the government favours and also used  to hide the abuse of power by UMNO leaders.

Yes, once a long time ago, I wanted for UMNO to be strong and powerful. I wanted an UMNO able to dictate what MCA and MIC will do within their coalition. I wanted the other races to fear an UMNO that would have the ability and capacity to invoke their power if need be and to use it diligently when required for the interest of the Malays.

These were many things we Malays have worked for UMNO to be……but now when all is done, we hate what we see. What is sad is that there are more pompous, arrogant, self-centred mediocre Malays in UMNO then anywhere else in Malaysia…..and yet their pomposity, arrogance and self centred mediocerness have made them rich.

We created this UMNO by giving them our votes. We place our trust in UMNO by continuing to give them power over these last fifty years. As it was our privileged to put them there it is now equally our duty to take them out. Do not let UMNO arrogantly pretend to tell you that their innermost motive is still to champion the Malays – and that all they need is time.

UMNO leaders now seem to have all the solution for the people to have a better tomorrow. They have 1 Malaysia to ensure that all are treated equally in this country. They have  MACC to combat corruption. They have the NEM to ensure the transformation of Malaysia into a High Income Economy. They are looking at amending the ISA and investigating Police murder of suspects under their custody and doing many things that promises much but deliver nothing. It reminds me of what Oscar Wilde said:

“She wore far too much rouge and not quite enough clothes. That is always a sign of despair in a women”

What hope is there for UMNO if it continues to do what it does today? None! Lao Tzu said "If you do not change direction, you may end up where you are heading” Methinks the time is past for UMNO to change directions.

Email ThisBlogThis!Share to TwitterShare to FacebookShare to Pinterest
Labels: umnophobia