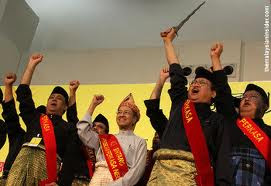 Why are there people like Ibrahim Ali in our midst? Because they articulate the thoughts and aspirations of some Malays in Malaysia. There are Malays who feel passionately about Malay rights and the Royal institution. Ibrahim understands that while these Malays are in the minority he would get some mileage out of the issues if he appointed himself their spokesman – or as he would prefer to say – their champion.

When you make an issue of these highly emotional issues the media and people will take notice. Why? They want to know who is the stupid idiot who is making so much noise about issues that should be discussed rationally and calmly and not be used to stir racial and religious animosity between the people of our country....so why is this Ibrahim stirring up a hornet nests? 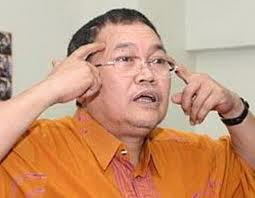 Well if you look at how this Ibrahim operates in the past you can understand his modus operandi. When he is in need of money he finds a way to make some. Any issue will do. PAS, UMNO, Royalty, Vincent Tan.......

......Mahathir….where he smells money he goes. He is good at this and you have to give him credit for it - but at the end of the day all that Perkasa will be is a footnote at then end of the page…..after an asterisk…but even then this Ibrahim has done better than most of us. How many of us is even a footnote at then end of a page? Not many, but we still have our dignity and the respect of many of our peers.

First thing first….about the Royal Institution that he champions. This institution has already been neutralized by UMNO – Mahathir to be exact! The simple truth is this. The President of UMNO, our Prime Minister, has more power then the Agong. The Agong will have as much power as UMNO will want to give him. Hence the claim by Rosmah that she is the First Lady…but that is another story for another day.

There is nothing for this heroic youth chief to defend. What is left of the Royal Institution is that it is a drain of public funds to maintain them and they do nothing for our country or the Malays. There is no sense in defending the power of some one who does not have any power. If you want to defend the Royal Institution then go for Mahathir and for UMNO. Do not go for a Chinese lady like Helen Ang. She is unable to defend herself through any channel because she is a Chinese. We know that now days not only are the non Malays second class citizens but there are already Malays put in the same situation by the BN Government! Helen or anybody else cannot even do one-tenth the damage that UMNO has done to the Royal Institution.

With the ISA hanging over our head, anybody insulting the Agong or the special rights of the Malays would be stupid. They would be stupid because we all know that UMNO need no reason to put anybody under ISA. Helen Ang is not stupid. And if you continue to insist that Din as Minister of Home Affairs is stupid to not understand what Helen is doing – (I will agree with you there –that Din is stupid!) – then you must be stupid yourself! While I am here in Adelaide and far away from Din you are right there within his grasp and that of the ISA. So be careful!

You said that the Doa is part of Islamic culture. Agreed. But in this enlightened times that we live in, just as the Muslim will not want the prayers of other religions to be said in front of them, Muslims should also give the same consideration to other religion and not have the Doa said in front of those who are not Muslims. This is call good manners. That the Chinese, Hindus, Sikhs and Buddhists have been quiet while the DOA has been said in their presence does not mean that they like it or accept it. They are just showing respect to the Muslims. Have the same respect for them. That they might be arrested under the ISA if they complain about this has got nothing to do with them being quiet!

For Ibrahim Ali he has almost used up all of his fifteen minutes of fame. But do not discount him just yet. Vincent still has not got his betting license. Samy Velu might decide that he still needs to have a few more years in MIC to bring ‘new faces and new blood’ into the movement. Mahathir will certainly need assist to get Mukriz a Ministry and any support from anyone to prolong the Royal Institution will be welcomed by the Royals themselves…beggars cannot be choosers. So there is still hope for Ibrahim…just who will bid for his services?

Bottom line? Ibrahim and his Perkasa Youth are talking about defending Royalty. An institution that has already been neutralized by UMNO, by the Malays themselves – not by the Chinese, the Indians, the Sikhs or the Buddhists. As always the Malays kill their own better then anybody can!

As for defending Malay Special rights. If you think you can build Perkasa into a movement that will be in a position to “negotiate” with UMNO for some worthwhile financial remuneration to do what UMNO wants you to do to assist them in the coming general elections…..I can only say this. Get in line. There are many others in front of you…and most of them are UMNO members and their cronies!

I know this Ibrahim from the time many many years ago when he had an ‘office’ in one of the houses in Tasik Titiwangas – when he was carrying around bags of cash for his then political masters. Masa tu this heroic Arman Azha belum bersunat lagi!

And I have been aware of Ibrahim descent into the pit of money politics. Today when what drives him is not his concern for his race, his religion or for Royalty. What drives him is where his next massive financial windfall will come from. There is one big difference now. People, including those in UMNO, are wise to the antics of this Ibrahin son of Ali…he might throw his heroic Youth Chief a few ringgits for doing his biddings – but the big Ringgits he will keep for himself.
And for this Ibrahim son of Ali and people like you – when the smell of money is gone – you too will be gone. We will not have too long to wait. Meantime I suggest you should not call Din stupid He is still the Minister of Home Affairs. He and his cousin can cause you and Ibrahim a lot of problems…and pain. The ISA has been used on Malays. You are a Malay and let me tell you…it does not matter who you are…a few hours with the Special Branch for anybody..kechut telor!

But we must be grateful for people like you because you confirm that stupidity is alive and well in Perkasa. Not in Pakatan Rakyat!  Sure you are still strutting around feeling full of self-importance…enjoy it while you can. For most of us this Perkasa is simply an annoying blip on our horizon. A fly that has come from the rubbish outside our house to trouble us momentarily. To be indulgently tolerated while we marvel at the stupidity of our fellow human being.

Ibrahim Ali  reminds me of Mussolini – a strutting egomaniac with soaring ambition for world domination but without the intellect to understand the limitations of his own self to be able to soar to those heights…and all the while being used by Hitler for his own purpose… until he was strung by his neck until dead by his own people without even the dignity of a trial. “During the last days of the war in Italy, Dictator Benito Mussolini attempted to escape the advancing Allied Army by hiding in a German convoy headed toward the Alps.  Partisans stopped and searched the convoy at Dongo.  They found him in the back of a truck wearing a private's overcoat over his striped general's pants.  The partisans took him prisoner and he was later joined by his mistress, Clara Petacci, at Mezzegra.  They were executed on April 29, 1945, and their bodies were hung at an Esso gas station in the Piazzale Loreto in Milan. But while it lasted he had a blast…with his uniform, his mistress and his strutting around.

For now Ibrahim will have his day. When it suits BN, they will neutralize him too.


Can I suggest that Perkasa Members sing this song whenever Ibrahim makes his entrance...they can make two lines and he can walk down the line with them singing and clapping to this song and brandishing their Keris in the air!