NAJIB and the Fainting Goat syndrome.

With apologies to the late Peter Sellers.
Every deathblow that Najib thought he had dealt to Anwar and Pakatan Rakyat has come back to haunt him mercilessly. It brings to my mind the antics of the imbecile Inspector Clouseau of Pink Panther fame - a bumbling and incompetent police inspector whose investigations are marked with chaos and destruction that he himself largely causes. His clumsy attempts at solving the case frequently lead to misfortune for himself and others! 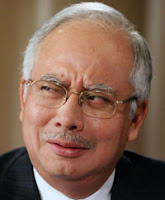 Perak heralded Najib’s succession as King of all he surveyed in Malaysia….what a way to announce his entry into power …taking back Perak from the opposition! Yes this he did…but at what cost?
Since February 2009 until today Perak is in flux. Azlan’s Shah neutrality as Sultan of Perak was sorely tested and questioned by the people of Perak because Najib dragged the Sultan into the mess. The State Assembly has now descended into a place of chaos and farce resembling wrestling within the rings of the WWF. Without PDRM overwhelming presence in the State Assembly, the state government installed by Najib cannot even exert its authority within the house, what more the state. Predictably the three opposition assemblymen that crossed over to Barisan Nasional were at one point or another involved in money politics, outright corruption, paid sex and illicit sex.
If the by-election of the federal parliamentary seat in Bukit Gantang, won by Nizar with an increased majority, is any indication of things to come in Perak, then the opposition will win back Perak with an increased majority at the next election opportunity. And more worrying it confirmed Nizar’s, who stood for the Islamic PAS party, as having the ability to win overwhelming support from the Chinese and Indian voters – and his emergence as another capable opposition leader that will have much to contribute towards making life uncomfortable for Najib.
And then Sodomy Two. Here even Sang Kanchil with its legendary guile and cunning would have an impossible time trying to keep up with proceedings….and so the call goes out again to Inspector Cloueseau.
Every new day of this Sodomy Two adventure brings with it hilarity at its very best at the expense of Najib. From the bumbling start the evidence all point out to collusion between Najib and Saiful to concoct the sodomy two case against Anwar.
We were entertained to a tableau of anal or anus horribilis. For a country that is only now contemplating the necessity of sex education in schools we were given another Mahathir like show where anything and everything can and will be used to humiliate another Muslim, another Malay – if that is what it takes to rid UMNO of a troublesome adversary. The question of guilt or innocence, justice or fairness does not enter into the equation.
Then as in all matters where Najib takes charge this punitive exercise predictably descended into farce. It started with an aide to Najib, Khairil Jusoh, the same Khairil Jusoh who posed with Saiful outside Najib’s Office, bonking each other. 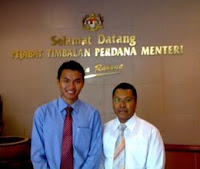 Despite this Saiful, having, like Najib, used religion for his own purpose, was resolute in his resolve to go ahead with sodomy two.
Then the emergence of yet another sexual escapade – this time that of Saiful and Farah Azlina Latif, deputy public prosecutor (DPP) involved in the same case.
Another deafening silence.
Then just when it seems that all was quite on the western front another broadside from RPK.
What about the AG fornicating with his own head of department? Ohhh the mind boggles with all the goings on in the Attorney General’s office!
Another deafening silence?
Yes it is possible! When you control the media in Malaysia that can be done. It is not a matter of if anyone will or will not, but a matter of when some one will tell Najib that the King has no clothes. Meantime our country lurches from one shambles to another!
The only thing that can top this is if you have Najib, Saiful and the Attorney General in a Ménage à trios…in bolehland is that possible?
Najib must be running out of ideas by now. UMNO’s support has slumped under him. There are now engaged in brinkmanship politics with MCA. MCA endorsement and support was crucial to Barisan Nasional holding on to power in the last general election and will be critical again in the coming election. Barisan Nasional has been damaged by revelations of Taib’s greed in Sarawak….something that has been under wraps until now.
UMNO handled the losses of the 12th general election by heaping blame upon Pak Lah and installing Najib as president of UMNO. How will they handled their present impasse? With Muhyiddin? Well for a start Muhyiddin could hardly do worse then Najib…or could he? Ohhh the perils of being an unelected Prime Minister must be excruciating to bear.
UMNO has to decide who is to lead them. If they do not chose Muhyiddin now to lead them into the 13 general election will there be any UMNO left after the 13th GE for anybody to lead? MCA is disintegrating. MIC is always what it has always been – a sideshow with a cast permanently headed Samy Velu. The premise that has allowed UMNO to stay in power for the last 53 years is rapidly losing its relevance – Ketuanan Melayu has become an anvil around UMNO’s neck. UMNO needs to cast it aside to get the Malays and the non Malays onto their side and yet UMNO’s very survival is dependent on keeping the ketuanan Melayu anvil around their neck! Damm if I do and damm if I don’t.
UMNO needs to connect with voters who are too keenly aware that UMNO politicians are corrupt, greedy and obsessed with power – and these same voters are too aware that their votes counts. Looking at all this it would seem that UMNO’s task is formidable.
But its current crisis is self-inflicted by a Prime Minister  -Mahathir – who has since left, and a current Prime Minister who has no clue on how to deal with a worsening political impasse. Najibs modus operandi is to ignore the elephant in the living room. Quite like the fainting goat that faints at any sign of stress or danger and then gets up again sometime later to proceed with life.


Fainting Goat: "A fainting goat is a breed of domestic goat whose muscles freeze for roughly 10 seconds when the goat is startled. Though painless, this generally results in the animal collapsing on its side. The characteristic is caused by a hereditary genetic disorder called myotonia congenita. When startled, younger goats will stiffen and fall over. Older goats learn to spread their legs or lean against something when startled, and often they continue to run about in an awkward, stiff-legged shuffle".


The question that the goat does not address is that if a predator were to be around while the goat was out for the count, it would be eaten up before he recovers from his faint! So I think Najibs would have to stop his fainting spell for now and remain wide awake to deal with the elephant in the room.
Malaysian are angry. You only need to mention politicians in a conversation and every one in the kampong will off and running after the proverbial pencuri brandishing an unsheathe parang or keris (whichever is handy) going after the pecuri.  But their anger is contained, slow- burning and building up in a passive aggressive manner. They will not put up with the politics of Barisan Nasional anymore.
UMNO claims of entitlement and wealth has made the ordinary people of this country understand that UMNO does not care about the ordinary Malaysians.
The only difference between Malaysian and the tin pot alley dictatorship in Africa is that here in Malaysia, UMNO clings to power legally. So bring in the 13th  and let the people decide.
What political capital left by his father legacy has been frittered away recklessly as Najib prioritized his personal agendas over the nations. Without the political capital left by those before him Najib is bankrupt of ideas.
Hold this thought in your mind when you think of UMNO. Think of the ship orchestra fiddling away desperately for their dear life on a sinking ship. The Captain shouts encouraging words to the orchestra urging them to hold fast even as he steps into a lifeboat to safety. The orchestra is UMNO. Surely it is a measure of how desperate UMNO is if it is their own tongue that must be used to praise themselves! The only hope UMNO has is for a hopeless future. Amen 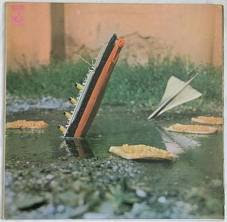