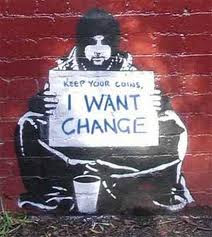 When did it started to go wrong for Najib? With every crisis in UMNO he rolled with the punches. Never getting involved too intimately with any faction within UMNO. Always holding his tongue and his support to any faction until he was sure of a winner. Then he will go with the winning faction. No it was not Najib being cool, calm and collected. It was just that Najib never had the nerve or the guts to commit himself to any situation in which he was less then 100% sure of victory. But now he has no side, no faction to chose. 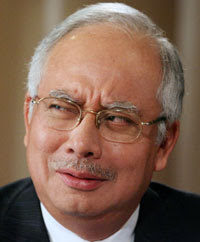 Yes we understand that for Rosmah and Najib they are facing the fight of their life. How do they remain in power? How can they ensure that Najib is till PM after the next general election? Can all the accusation of abuse of power and money politics now directed at them be dealt with to ensure no reprisal after Najib has left office? Mahathir managed that okay but at the rate that abuses under Mahathir’s rule are now being out on to the public domain, how long will that last? Yes we understand that  to you and Rosmah these are  clear and present danger that you are both facing…but let us look at it in perspective.

What are the challenges and hardship that you now face when compared to what the family of those murdered under Police custody face? Those families whose sons have been gunned down indiscriminately by the Police?

How do the family of Kugan, Teoh Beng Hock and Aminuraysid deal with their unexpected sorrow of losing a love one? Just because they are not rich and powerful does not in any way make their loss trivial? How do they grieve? Those in power seem to be immune to the suffering and grieving of its ethnic majority. The poor, the sick and those who are powerless to defend themselves against the brute force and intimidation of PDRM and other Government Ministries acting to ‘protect’ the vested interest of the Barisan Nasional government?

It is this phenomenon of the oppressed being dealt with harshly and without compassion that defines the BN era as it draws to a close. It would seems that the more powerful BN is the less caring BN becomes. Who are the Police bullying when the intimidate and harm demonstrators? Ordinary people..that is who! Ordinary people who care enough about the injustice under the BN rule to put themselves in harms way.

It is these ordinary people that are making a difference to the political scenario in Malaysia. These people are faced with the reality of having to deal with a corrupt police force on a daily basis as they go about trying to earn a decent living. They see around them all the abuses of money politics. A public transport system that does not work because those who were first given the opportunity to operate these business have milked it dry of any possible profitability.

These ordinary people are paying too much for the use of the highways and tolls around and outside KL because the toll operators only concern is to make money – money that was use to pay off the politicians who gave them the contract, money that was use to bribe the powers that be to ensure that their secret toll agreement are sufficiently lucrative to enable them to laugh all the way to the bank and money to ensure their toll collection period are extended time and time again with toll increases being part of the bargain. Yes these toll roads do ease traffic congestion and travel times….but at what cost to the country and to the ordinary people?

These ordinary people are victims of crimes because gangsters and the police work on the same side to take what they can from the wage earners. As it is now what they earn and what their money can buy diminishes by the week.

In the media on the Net these ordinary people are daily confronted by the myriads of information being conveyed. They read and make their own decision as to what is to be discarded and what is to be believed. I am sure sometimes it gets too overwhelming. Years of conditioning by the BN machinery does go a long way to make these ordinary people more accepting of what has been happening in the past. But times are a changing.

It has to change when these ordinary people become aware of increasing Police brutality, Police murder…some of whom are barely teenagers! 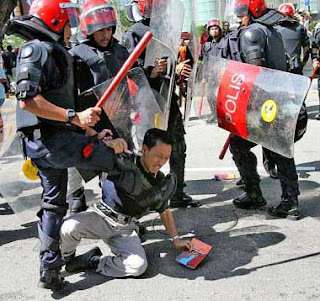 It has to change when these ordinary people becomes aware of so many abuses by BN. All there in the public domain on the net to be accessed by anyone who chooses to do so. Last night I read about the Attorney General fornicating with his Head of International Division, Azailiza Mohd Ahad. This morning I went to have a look at how NST would present this story for the public to read. Nothing. Nothing in Bernama…so nothing in any of the government media.

Now here is the thing…by now I would think at least half of the population of Malaysia would be aware of this piece of news. Without any doubt everybody who is anybody in government would have known about it last night! All over Malaysia and yet not one word about it on NST or Bernama? How come?

And this is why the ordinary people want change! They are Malays, Chinese, Indians, Sikh, Ibans …of all ethnicity and religion…it transcends all the divides…They can no longer be grouped under one race, one religion one state or even politically. No they are not against UMNO or for PR.

They are just fed up of being treated like idiots. Like the breaking AG story today. Print and let the Ag defend himself. If he is guilty he resigns. If he is innocence go sue RPK. The mechanism to do all this is in place in our country…is it not?

These ordinary people know what they want to do with the votes they have. They will vote for change. For a decent government that cares for the well-being and welfare of its people. There are too many of them informed and in the know to be affected by any ill-conceived attempt by any politicians to duped them into voting for BN or PR.

These ordinary people are the people that will make the difference to the future of our lives.

Najib understand that it is not what you do with UMNO that will make them vote for you or for UMNO. It is no longer UMNO that will decide who will be PM of our country. Those days are gone. What happens in UMNO now does not matter anymore. The warlords or the factions can elect whom they want as President of UMNO. UMNO can decide to end money politics, ask all your ketuas to declare your assets or get Pemuda to apologize to Karpal. Hell you can even make it illegal for any UMNO member to carry any weaponry into the General Assembly…including the Keris! All this will still not help UMNO. The time has come for change and it is these ordinary people that will effect change.

There are many in UMNO who has seen the writing on the wall that says “The end is Near”. Those that are wise enough are already preparing themselves for their time in opposition. To ready themselves to be an effective opposition because they know that given the right leadership, UMNO still can make itself relevant to the Malays and to other Malaysian. Whatever government comes after BN  - there will still be need of an effective opposition to keep those bastards in government honest! 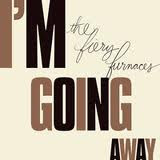 In this UMNO there will be no place for Najib and many of those current leaders. With their wealth these ousted leaders will not have the stomach to fight the good fight politically. Like Razak Baginda and many other wealthy Malay what beckons in London, USA and Australia is more inviting then the cut and thrust of gutter politics in UMNO.

Once all the dust is settled we hope to see the emergence of a responsible and accountable group of politicians within BN and PR. We want to see a government that will oversee that its Government Ministries are managed for the benefit of its people – not act as an extension to fulfil the money making greed of the Minister in attendance – as it is done now under Barisan Nasional!

The future will be for these ordinary people. 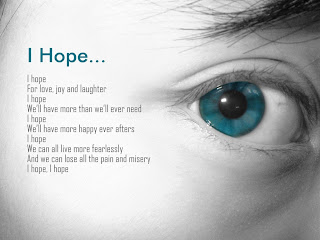 Email ThisBlogThis!Share to TwitterShare to FacebookShare to Pinterest
Labels: wait and hope