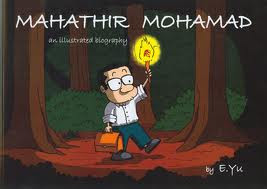 Not another article about this old man! This time from Kit Siang and Art Harun! Two people whom I know can write up a storm when they want to! It does not matter what they write about this old man but must there continue to be such fascination about a man past 80? A man in the prime of his senility? And don’t anybody tell him so for the same reason you will not tell a man that he is mad. If a lunatic wants to believe himself King of England, he will be King of England! If this old man wants to believe that everyone is a racists – who are we to tell him no? While the old man insanity may be an object of distress for us, that madness is comforting to himself. So leave him be.


I must take Art Harun to task for “Eh Tun dah Lupa” article. It is not the fasting month that is affecting the old man thought process….neither is it premature senility. Deep down within himself I think this old man is quite shallow. There is nothing wrong about being shallow in as long as you are not aware of it yourself. It is for others to judge. And judged him we have!
How else do you explain him thinking that the post of Prime Minister of Malaysia is his in perpetuity? There have been so many stories about his exaggerated achievements during the twenty over years of his rule that he now believes in its reality. Now like Don Quixote in the “Man of La Manchu” he sullies forth on his old trusty horse (in his case on the back of UMNO and Perkasa) accompanied by his ‘squire’, the Perkasa peasant Son of Ali, to perform heroic acts for his people  the Malays. This old man is hopeful in the belief that against all odds the people of Malaysia will one day thank him for the great service he has done for the country and its people.
Contrary to all that believe it so, his stint with Perkasa was not the joust he had with the windmills whom he thought were imaginary giants. We still await with bated breath for that moment to happen. Possibly an attempt to make his son Prime Minister in a Pakatan Rakyat government might prove to be his swan songs to politics.
And while he fights the good fight his quest is best summed up in the song “The Impossible Dream”.
So leave him be....leave him to his dreams until his brains dry out!
Posted by STEADYAKU47 at Wednesday, August 25, 2010