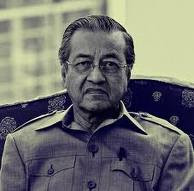 Mahathir is indeed a master of all things politics. He transcend UMNO, Barisan Nasional and possible everything political in Malaysia. Mahathir’s shameless political pragmatism is only trumped by the audacity of his use of issues, whether racial, religious or economic to further his own agenda.

But perhaps in the twilight of his years he has become frail of mind and unable to be the clever manipulator of the public as he once was. He predicted that there will be an escalation in racial tension and division should NEP-style policies be removed.  This judicious use of racial and wealth division to conjure up an Armageddon that will destroy our country has only inadvertently exposed Mahathir to the public as the master manipulator that he really is. Perhaps, this time irrevocably! Let me explain why I say this!
Even at 84 Mahathir wants himself to be relevant. Consistently from the time he left government that has been his holy grail. The appointment of Pak Lah as his deputy was a decision made by Mahathir and Mahathir alone. At its simplest level this decision was his prerogative as Prime Minister then. At its worse it was a decision Mahathir took to have someone to succeed him whom he thought he could control and do his bidding when asked.
When the man he chose to succeed him did not (for whatever reason) meet his expectations Mahathir set out to make himself relevant to the process of removing Pak Lah from the office of Prime Minister. How did he do this?
He knew where to look and understood what had to be done and did it. In the name of saving UMNO and Malaysia he worked tirelessly to remove Pak Lah from office. There is no need to go into the intensity of his efforts – suffice for us to reprise his personal attacks on Pak Lah and Pak Lah’s family, on KJ and his ability to even harm UMNO in the process by leaving the party he was once President of – not forever but only until such time as Pak Lah was removed – then he returned as the prodigal son. What can be observed is the single mindedness of this evil man to have his own way no matter what. He had something he wanted to do (remove Pak Lah from office) and how he chose to do it did not matter as long as the end justifies the means. 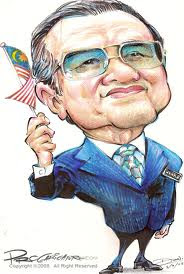 And now he is at it again. He judges that the racial divide and the unequal division of wealth are issue the public wants resolve. Yes he is right in this assumption! But the words and phrases he uses to frame these issues are chosen not to resolve or manage these issue in a responsible manner but more to incite the people to take sides and formed rigid division amongst the races  - at precisely the time when we have no need for these divisions.
Mahathir is not bound by any of these sensibilities. He sees an opportunity to use race and distribution of wealth as a means of making him relevant again  - if not to all Malaysian – to enough Malaysian as to create unease within our country. And so Mahathir emerges as the new prophet who skillfully frames the question of race and wealth distribution as the question that must be addressed NOW – over and above anything else. Recklessly he has issued the clarion call – and so he is relevant again.
An UMNO and Barisan Nasional with its back against the wall is torn between trying to decide if what Mahathir is trumpeting is indeed the most important issue of the day.
Of course it is not. Corruption is. Nepotism is. Racial divide is. Politicians who abuse their power is. You eliminate these issues and all will fall into place. That these issues are the problem is already known to all and Mahathir cannot gain enough traction from these issues to establish his relevance in the political arena where Barisan Nasional and Pakatan Rakyat are doing battle.
And so he comes up with this :
Dr M warns NEP removal could lead to revolution.
And he now has the attention of the Malays, the non-Malays, UMNO, Barisan Nasional and almost everybody else because we all want to know who is this idiot talking about Ketuanan Melayu and keeping the non-Malays as second-class citizens? Who is waving the specter of revolution and a May 13th over the whole country if these issues are not addressed immediately? Who would do this? Mahathir of course in order to be relevant!
So don’t you all think that it is time we just ignore this man who wants to be relevant in a time when he is no longer relevant? Mahathir has cried wolf too many times in the past to be believed. This man manipulates friends and eliminates enemies. He is not a wolf in sheep’s clothing. He is the wolf through and through. Be wary of this wolf call Mahathir.
The wolf was sick, he vowed a monk to be - But when he got well, a wolf once more was he. Walter Bower
Posted by STEADYAKU47 at Monday, August 30, 2010