A Thai coffee vendor is refusing to drop his "Starbung Coffee" logo, defying legal threats by US multinational Starbucks.
Last week, a Thai law firm filed a complaint on behalf of Starbucks Coffee Company against Damrong Maslae, 44, for not complying with an injunction issued in 2012 to remove the "Starbung Coffee" logo from his sidewalk stall in the Thai capital.
The international coffee giant has demanded compensation of 300,000 baht ($A9950), plus 30,000 baht ($A995) a month in legal fees.
An initial hearing has been set for November 4.
"I will fight the case," Damrong told DPA on Wednesday.
"I may lose, because Starbucks is a big company with a lot of money, but I have already won my case in the eyes of society," he said.
"My customers, both Thais and foreigners, have given me a lot of moral support," he said.
"One client gave me 1000 baht ($A33) to help fight my case and yesterday another paid 500 baht for a cup of coffee and told me to keep the change."
Damrong, a Muslim from Krabi province in southern Thailand, insisted that his green-and-white logo, which depicts a Muslim man at its centre with crescent moons on the side, was inspired by Islam, not Starbucks. 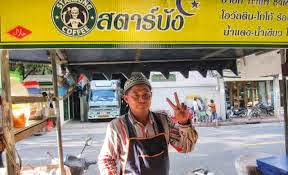