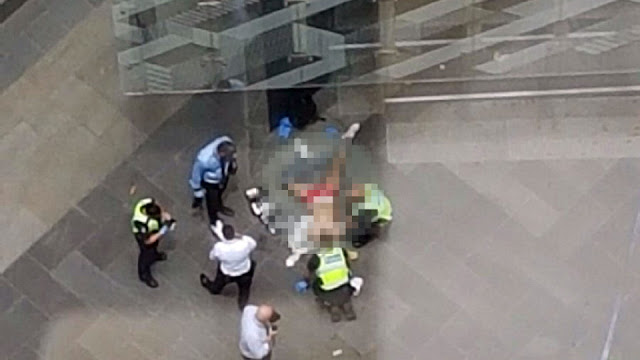 Three people are dead and 20 are injured, including a young child, after a car “deliberately drove into pedestrians” in a busy shopping area of Melbourne’s CBD.
Up to five shots rang out while police pursued a car through the central streets of Melbourne on Friday afternoon and witnesses reported seeing blood on the streets, a toddler dragged for several metres, and heavily armed police cordoning off the area.
Victoria Police said a male suspect had been detained, one person was dead and that the situation had been contained.
An Ambulance Victoria statement said 20 people were being assessed for injuries while the Royal Children’s Hospital confirmed it had received four injured patients while Royal Melbourne Hospital had received six.
The condition of the young child is unknown.
The incident is believed to have begun on the busy corner of Flinders Street and Swanston Street, in front of Flinders Street train station.
Footage on social media showed a red car circling the intersection before driving down Swanston Street.
Witnesses then told The New Daily the car drove into a crowd of pedestrians in the Bourke Street Mall, a street usually closed to cars.
Multiple witnesses told The New Daily a car mounted the curb of Melbourne’s Bourke Street Mall and drove into a crowd.
Ambulance Victoria told The New Daily they had received multiple calls around 1:30pm reporting a car had hit pedestrians on Bourke Street Mall.
Multiple images and videos posted to Twitter showed one person dressed only in red underwear being detained by police alongside a red car with a heavily crumpled front.
A witness told The New Daily he saw a red car being chased by police, which then “mounted the curb in front of a shop and then it ploughed through a crowd hitting people”.


A woman who works in Royal Arcade, a mall adjacent to Bourke Street, told The New Daily people were terrified.
“We heard a loud bang and then people screaming. I heard the car driving down Bourke Street Mall. Then we looked out and saw a red car with two police cars chasing.
“Once people heard the bang they all started running through Royal Arcade and through Bourke Street Mall.”
Buildings nearby the incident were in lockdown. A nearby office employee, who works in 570 Bourke Street, said her floor was in lockdown after the emergency alarm went off, with security telling employees to stay on their floor and keep away from windows.
A Myer staffer inside the Bourke Street department store told The New Daily that there was “police activity” in the Bourke Street Mall.
At 1.45pm an announcement over the loudspeakers inside the store was advising shoppers that they were “shutting the front doors” where there was no access.
A teenage witness told The New Daily she had to dive into a shop to avoid being hit.
“The car was speeding along the tram tracks, going really fast, and then it just swerved onto the footpath and people were diving everywhere to avoid being hit,” she said.
“I saw this father scramble to push his kid out of the way, otherwise the kid would’ve been run over.
“Then the police cars drove through and everyone was just in shock, kind of not believing what had happened, and just checking to see if everyone was alright, or if anyone had been hit.”


steadyaku47 note : Police have confirmed that this is NOT a terror related incident and they have a suspect in custody.
Posted by STEADYAKU47 at Friday, January 20, 2017