Take a few moments this morning to reflect on the absurdity of having idiots, morons, imbeciles and the worst among us to occupy the most elitist of positions in our society! These are the people in government, the people who heads the very institutions that decides on the well being, safety and future of our people. Can you find among them all a decent, ethical and moral being? Not a dozen, not two or three....but just one decent, moral and ethical being?

Not the prime minister, not his wife! Not the DPM, not anyone in cabinet! Within the opposition are a few good men and women but none who are without the sins of political office so familiar to us all....kebendaan....the getting of material wealth. And if any of them protest too strongly at my assertions then I ask that they think carefully if any of them have earned the explicit trust of the electorates sans considerations for race, religion and political? Can anyone of them, in government or in opposition, put their hands up and say with conviction....I am your leader?

And yet even as these thoughts pass through my mind there is one name that seems to be above all this....one name that seems to transcends politics and race. What he does in his personal and public life are a series of selfless deeds and acts that tells us that this is someone who understands that politics and public life is something you do because you want to serve the nation and its people and do it well enough to ensure that all will be good for the generations to come.

This man is Rafizi Ramli.

At first his youth raises doubt in my mind as to his ability to commit and persevere in politics...but day by day, by the things he does, that things he says and by his deeds and intent, I told myself that I must look beyond his youth and his race. I must look at what he has done in his private and public life....and if you do too....you will see in Rafizi Ramli, our future!

And nothing defines Rafizi and what he stands for as:


And read here what he says about himself:

RAFIZI SENTENCED TO 3 YEARS IN JAIL


I have been convicted on 2 counts under the Official Secrets Act for revealing 1MDB secrets. My sentence is two 18-month terms of imprisonment, running consecutively for a total of 3 years


Do not despair. I do not have a single regret and the most peaceful thing in life is knowing you did the right thing.


Everything that is supposed to govern this country in a just and fair manner has broken down. The only way to change this and make Malaysia promising again is for each of us to play our role.


Since my conviction, INVOKE has continued to grow, and we are redoubling our work. I am overwhelmed by the tremendous outpouring of support from ordinary Malaysians just like you who are committed to change. I encourage you to show your commitment by clicking HERE 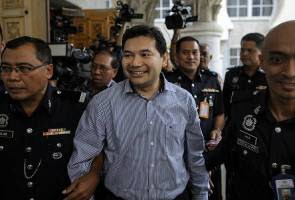