Not too long ago the KDN (Ministry of Home Affairs) denied that Zakir Naik was even granted PR status. Here is some news dated 29 November, 2016 just over FOUR months ago : 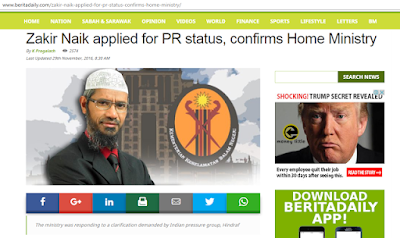 KL : The Home Ministry today confirmed that Islamic Research Foundation president Zakir Naik had applied for a permanent resident status but no approval has been given yet.

“He applied for a permanent resident status only and it has not been approved yet,” said a top official of Deputy Prime Minister Ahmad Zahid Hamidi who wished to remain anonymous. Zahid is also the Home Minister.

My comments :  Note these two lines,


This was just FOUR months ago. The KDN said no approvals had been given for Zakir Naik's PR status.

But in today's news Zahid Hamidi the Minister of Home Affairs says that a PR was granted to Zakir Naik FIVE YEARS AGO ! !


Islamic preacher Dr Zakir Naik has been holding permanent residence status in Malaysia   since about five years ago.

This was revealed by deputy prime minister Ahmad Zahid Hamidi when met by reporters in Putrajaya today.

"I would like to confirm that he holds a permanent residence status in Malaysia.

"I think he has been holding the status since about five years ago   said Zahid.


My comments :  If he had been granted PR status FIVE YEARS ago, then why did the KDN say in November 2016 (just FOUR months ago)  that Zakir Naik's PR application had not been approved yet  ??

Here is that news report again :

Now Zahid says that Zakir was given PR FIVE YEARS ago.

After FIVE years of PR status surely he is also eligible for citizenship.

Why do we give PR to all these sampah sarap from all these crappy Third World countries?  They do not bring any good things to our country except controversy and more trouble.

Now the Indian govt has issued a warrant of arrest for Zakir Naik, relating to his controversial activities.

Are we going to ignore India's arrest warrant just because India is a Hindu majority country and Zakir Naik is a muslim ??

Here is a latest video of Zakir Naik.  In this video he is clearly inciting hatred against Malaysian citizens.

Listen carefully. He is asking, "Is there only one Muslim in Malaysia?"

At the very end he asks "Are the Muslims of Malaysia sleeping?"

He wants Malaysian Muslims to go and make police reports against the Hindraf and against Waythamoorthy, the Hindraf chairman.

He says a police report should be made against Waythamoorthy, among other things because Waythamoorthy met and shook hands with Indian Prime Minister Modi ! !

Punyalah bodoh. Our Super Moron has also met and shook hands with Modi. 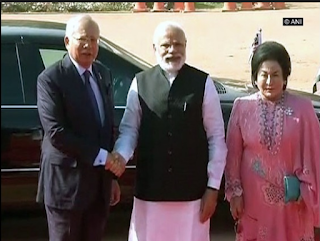 He says in the video :
This is clearly instigating Malaysians against each other because we are a multi racial, multi religious, multi cultural nation.  We do not need this type of  hatreds.


Zakir Naik may have an issue with Hindus in India and with PM Modi in India.   He should not be allowed to bring his hatreds from India into Malaysia.   India is a screwed up country with their own screwed up problems involving Hindus, Christians, Muslims and whoever. That is not our problem.  We are Malaysians.

India has issued a warrant of arrest for Zakir for the crime of money laundering which  he has committed in India.

If you are innocent or GUILTY  you must go back to Japan and clear your case in the Courts.  You cannot run away to Malaysia and accuse the Japanese of being bad or evil just because they issued a warrant of arrest against you.

This moron should be sent back to India. Not only to rid ourselves of these trouble causers and hate mongers but also for him to face the Court in India.

I hope Malaysian Malays (Muslims)  will also make a Police Report against Zakir Naik's statements in the video above where he clearly says :
He is instigating hatred between Malaysians on account of their religion.

Someone in this country must have some sense.