I received a viral WhatsApp the other day that the Kuala Lumpur General Hospital will be shutting down their outpatient clinic.
Does anyone know because I have not been there for a long, long time.

Outpatients now have to go to a Klinik Kesihatan which is located near the Shell Petrol Station just across the road, so the
WhatsApp said.

Note that a Klinik Kesihatan need not have a qualified doctor present. They can be managed by Hospital Assistants or HAs.

The point is the gomen has no money to sustain basic health care. It is getting less and less.  The people are being cut off.
All because the kleptocrats aided by their sycophantic civil service rats have stolen over RM90 Billion from the country.

For a certainty the list of medicines available at the gomen pharmacies is also shrinking.

Non critical medicines or what I call "ubat mati lambat" (meaning you will not die instantly if you dont get the medicine)
are not being prescribed anymore.  Examples are Nexium for gastric and  Aerius for sinus problems are not available at
the HUKM anymore.


A three month prescription would cost about RM150 - RM180. Patients are told to go and buy these medicines from the
private pharmacies.  How many people, especially Malays, can afford RM50 per medicine per month? Usually you will
need more than one medication.  The berubat dengan bomoh business is going to boom again.

Ubat mati cepat or critical medicines without which patients may collapse and die instantly like Seretide and Ventolin
for asthma  are still available.

At the same time, this morning I noticed that the sidewalks along the  Dataran Merdeka are being replaced - again
and again and again.   (I say what happened to that billion Ringgit mangkuk hayun plan to build a 'Central Park' at
the Tugu Negara ?  Spend the money on medicine lah bodoh !)

Back to Dataran Merdeka, they are now laying marble tiles (or marble type) along the sidewalk. Fuiyyo. So reeech
one ah? Got so much maani ah ?

Why not give "Babuji Baling Gelas" a contract to supply 24 Karat gold tiles for the sidewalks? Then you can boast
that in Kuala Lumpur our sidewalks are paved with gold.  (Never mind if people's sinuses are all choked up.)

The Malay economy is becoming quite desperate.   And it is affecting all Malays - from the lower income groups all
the way up to the wealthy Malays.

On Sunday I observed a "pasar pagi"  (I will not say where).  Entire "usahawan Melayu" families turned up in their
Protons and Myvis and started  selling plastic toys and clothes by the roadside.

These are NOT pasar malam traders.  They are dressed differently, the ladies wear makeup and some can speak
English too. They are people with regular jobs (possibly civil servants) who are trying their luck at selling trinkets,
toys and little things by the roadside to earn some extra money.  They are not real  'usahawan'. They are poor or
getting poorer.

So is this what you have achieved after 60 years of  Independence and after 47 years of the NEP?  People are
being forced to literally  "live off the streets"  to make  ends meet.

Then massive amounts of Malay owned properties are also being put up for sale.  In the past few weeks I have
had offers for property sales in Kuala Lumpur,  Hulu Langat, Janda Baik, other places in Pahang.  All Malay
owned property.

Most recent is a kaya berhutang Malay guy who wants to sell two hotels he owns on some island (I won't
say which island).  The sad thing is the desperation. The first offer was RM15 million.  Then it went down
to RM10 million (I told you depa tak tahu niaga). Now the offer is 'just take over the monthly bank instalments
and keep the banks from declaring bankruptcy'.  At the same time lets agree on some price, payable by deferred
payments, tell me how many years you want ! !

I can guess what went wrong.  The fellow's hotels were most likely very dependent on "gomen business"
like the endless kursus for Civil Servants, kursus bina semangat, kursus jabatan agama, kursus guru sekolah etc -
almost all of which has now dried up.

means there is no money even for RM50 sinus medicine at the gomen hospitals.  So the gomen departments
are also cancelling all their kursus programs at all these hotels.  So now no more business. Hence the Malay
owned hotels are up for sale.

Then there is the case where someone (a Dato) is trying to pinjam RM5000 to meet monthly expenses.
He wants to sell or pawn something but no one wants what he has to sell.

In one housing area (located between PJ and Klang, ha ha ha) there is a gated community with about 40 - 50
'upmarket' bungalow houses owned by many "orang kaya Melayu berhutang".   Almost all the "orang kaya
berhutang" are having problems paying the monthly maintenance fees to pay the Nepali security guards.
If this keeps up, there will be no more security guards and it will not be a gated community anymore.
The values of their houses will drop. Double whammy.

There are other such cases, where people need to borrow money just to meet their monthly expenses.
They cannot run away from these fixed expenses - car payments, food,  school expenses for the kids etc.

And here is the MIER confirming that there are now over 500,000 unemployed in Malaysia. Of which youths
make up over 200,000. 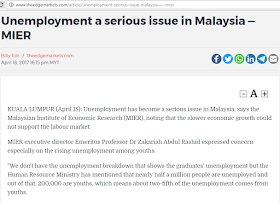 Email ThisBlogThis!Share to TwitterShare to FacebookShare to Pinterest
Labels: outsyedthebox