How rich is najib razak?

How rich is this najib razak? 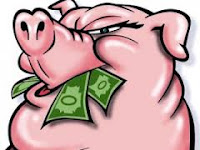 That was what I was thinking last night when I came across the story of a rich boat owner forgetting about his docked luxury yacht he left for two years in a Swedish Harbor worth USD $100K. How is it possible for anyone to forget a USD$100K luxury yacht?

Well.....what about this idiot of our prime minister who did not bother to find out how RM42 million found it way into his own personal account? Hell this morning I checked my bank balance and I would know if somehow RM42 (forty two ringgit!) somehow found it's way mysteriously into my personal account.

But then if you have had RM2.6 billion once deposited into your personal account those zeros that comes after those numbers may have confused you too....especially when this najib razak is not that bright a prime minister in the first place!

But then again if it is your wife who is signing the cheques and making arrangements for money (from parts unknown) to be despoiled into your account for her benefit...then you do have an excuse to plead ignorant of such funds.

So what is your excuse najib?

Or has the AG and that twit of an IGP cleared you of being a queen controlled dummy?


Highly improbable najib razak clueless about RM42m, says Zaid
Odin Tajué: Former law minister Zaid Ibrahim, yes, it is indeed highly improbable and simply unbelievable.
But PM Najib Razak has shown himself to be severely addicted to not telling the truth – to a level of severity that has seemingly caused him to be oblivious of the fact that he's only lying to himself.
Did he not claim to have thought the RM42 million transferred into his account had come from his imagined King Abdullah and yet he is said to have returned the balance of the ‘doh-nay-shun’ to the king in August of 2013 but the RM42 million was transferred into his account a year after that?
This RM42 million appeared in your account and you never bother to find out where it came from? Only idiots would believe him.
Of course, as many of us know now, there was allegedly another RM27 million from SRC International (SRC), thus making the total sum RM69 million.
Saya Pun Nak Cari Makan: Yes, I agree that it is highly improbable that Najib did not know that such a huge sum is deposited into his account.
If a person transferred even RM42 to another person, he would have notified the recipient at once, asking the latter to check if the money has been entered into his account.
As such if the transfer involved millions, the transferer must be an idiot if he did not notify the recipient about this huge sum of money.
Ipoh Pp: Even my son, who transferred a small sum of money to me, sent a message to me to check if the money had gone into my bank account.
Any right-thinking person, if he deposits money into another account, will want to know if the money has reached the recipient. This is to ensure that he did not accidentally bank it into a wrong account.
So this story from the PM not knowing RM42 million going into his account is mere bulls**t. Need I say more?
Read more: https://www.malaysiakini.com/news/329326#ixzz4fU5AbN8a

Email ThisBlogThis!Share to TwitterShare to FacebookShare to Pinterest
Labels: clueless about R<42 million in his account, Najib Razak