Zakir Naik and Berahim Berok : A Pair of Shit Heads!

In my first post on Dr Zakir Naik, among other things, this is what I wrote of him:

He is doing Dawah work, He is good at what he does and he is indeed a well funded evangelist - as to who is funding him and for what reasons is still a mystery to me. Suffice for me for me to say that for now I will keep an open mind as to who Dr Zakir Naik really is.

Then in another later post : Dr Zakir Naik : Cybersquare Block 1D, I wrote

"My sources tells me that he is now in Cybersquare Block 1D. He is looking/negotiating with real estate companies to rent various units there and offering to pay rent one year in advance - most probably to house his people from parts unknown. People who will probably assist him in his evangelical / Dawkah work in Malaysia and in other parts within our regions......Dr Zakir Naik is no politician....so I am wondering what umno has in mind in allowing this man to set up his base in Putrajaya and how umno will handle the  the possible ramifications (good and bad) that would follow any Dakwah activities of the magnitude that Dr Zakir Naik will be involved in.How will umno use Zakir Naik to its advantage? 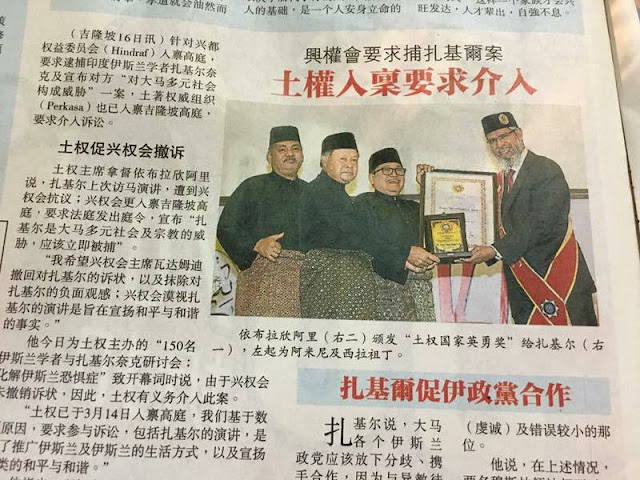 With the latest report coming from K Hell, things seems to be clearer as to why najib/umno has allowed Zakir Naik to base himself in Putrajaya, lease condos and bring in money from God knows where, to fund his dakwah activities here...the operational word here is not Dakwah but "activities".

Do not talk about the DAP spending RM20 million in Penang to take over land belonging to non-Muslim for use as a Muslim Cemetery. Umno has done more....much more for Islam.  Jakim's demand for RM1 billion in annual allocation is indicative of what this umno led bn government is doing for Islam because even the annual allocation of  RM724.6 million set aside for Jakim in 2016 was insufficient to do ALLAH's work in Bolehland...so says Jakim!

Hell even I can make a case for every Muslim in Malaysia to vote for this umno led bn government because everything that najib does "berlandasan al-Quran dan as-Sunnah". For  sure Zakir Naik can also do that and more!

So who do you think Zakir Naik will be asking Muslims to vote for?

So now we know why najib and umno has given Zakir Naik refuge from the authorities in India where his NGO :  Islamic Research Foundation (IRF) : has been banned as an "unlawful organisation" for five years.

In India an ‘unlawful’ association is different from a ‘terrorist’ organisation. The law defines ‘unlawful association’ as any organisation “which has for its object any activity that is punishable under Section 153A or 153B of IPC” — provisions dealing with threat to social and communal harmony. Declaration of IRF as ‘unlawful’ under Section 3 of the UAPA will force closure of its offices and interests across the country.
So not only is Zakir Naik, an Indian born in Mumbai, wanted in his own country but he  can also no longer have offices and interests in India.
The only country that will take Zakir Naik in is of course Bolehland.

And when you not only have najib/umno prepared to take you in...but also allows you to bring in funds without asking questions as from where the funds were sourced from...and even encourage you to set up a base in Putrajaya and bring in your own foreign workforce into Malaysia...I am sure that now  Zakir must be thinking what he could do to return the favor to umno and najib?

Your guess is as good as mine...but this report from India about Zakir Naik is self explanatory  and will tell you why this Zakir Naik's balls is now being squeezed by najib (and when your balls are being squeezed...your heart and mind will quickly follow)

New Delhi, Aug. 11 (ANI): With the Mumbai Police probe revealing that a total of Rs. 60 crore was deposited in Zakir Naik's bank account in the last three years from three different countries, Union Minority Affairs Minister Mukhtar Abbas Naqvi today said the controversial Islamic preacher's suspicious activities will be revealed soon.
"There have been several revelations one after another about Zakir Naik.His activities are against the interest of the country. Agencies are working on this. I am sure his activities will be revealed soon," Naqvi told ANI.
As per reports, the money was transferred to five accounts belonging to Naik's family members.
The police are looking into the financial transactions of Naik and his NGO Islamic Research Foundation (IRF).
Earlier this week, the Mumbai Police submitted a report on Naik to the Maharashtra Government after finding him to be allegedly involved in unlawful activities with possible terror links.
Naik had come under the scanner of the Indian Government after reports emerged that two of the six terrorists, who killed 22 people at a posh Dhaka cafe in July, were allegedly inspired by his speeches. (ANI)
And guess who Zakir is consorting with now? The "SHIT MAN" 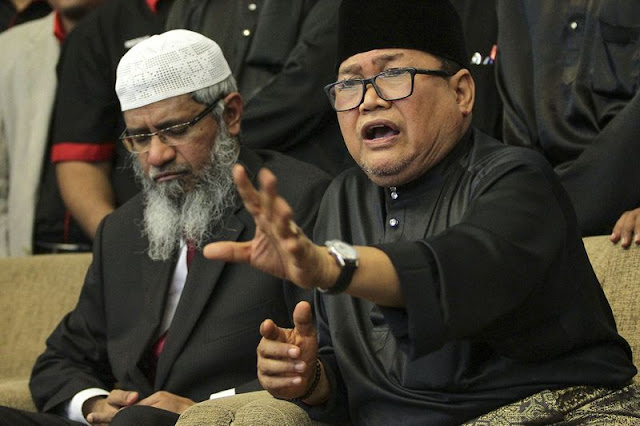 As I have said in the past "“If it looks like shit, smells like shit, and feels like shit, you don't have to actually taste it to know it's shit".......don't the two of them look like a pair of shit heads?