WHAT DID THEY TRY TO DO TO TUN TODAY? 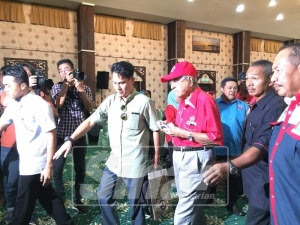 It is now 1.27 am pagi Sabtu. To say that I am angry would be an understatement....furious would not cut it. I am simply amazed at the audacity of what najib is now doing in his desperation to keep afloat in that cess pool that he is now drowning in...a cess pool of his own making!
What did najib try to do to Tun Mahathir today? Can some f**king umno or BN machai tell me what Najib was trying to do to Tun Mahathir today? Was it a coincidence that the plane that was to take Tun to Langkawi today "mengalami kebocoran yang teruk dan tidak dapat dibaiki dalam tempoh yang singkat?" Guys this is too much of a coincidence happening just at the very moment that Tun Mahathir had to arrive in Langkawi for his nomination to contest the Langkawi parliamentary seat! Was it to delay Tun's arrival in Langkawi so that he will NOT be on time to file his nomination papers or was najib's motive more sinister?
What if the "kebocoran yang teruk" was not detected? What if the plane did take off for Langkawi? What would happen to Tun? I shudder to even think of what might have been!
Let me take over from there and tell you what else happened!
I have to tell u all that it was GOD the Almighty that saved Tun Mahathir.....for what happened next tells us that Najib would do anything to prevent Mahathir from getting to Langkawi.... ANYTHING!
Mokhzani’s good friend was going to S’pore in his private jet and when he heard about Tun's predicament he cancelled his flight and let TM used his plane. Yes that f**king Najib did find out that Tun had switched plane.... but by the time he found out, it was too late to instruct Langkawi Airport to divert the plane to Penang and stop Tun Mahathir from landing in Langkawi!
By the time Tun arrived in Langkawi the story of his aborted flight was already viral in Langkawi especially amongst those who were at the airport to greet him...and they are angry! Very very angry about what had happened to Tun......and all this happening after najib had done an interview the night before on Bloomberg where he said that BN was going to be returned with an increased majority!!!
if that was so...then why was there any need to stop Mahathir from landing in Langkawi?
And they all knew the answer....najib takut kalah. najib takut kalah. najib takut kalah....and this mantra went around the airport and then around Langkawi and at each telling, Tun Mahathir's stature grew and grew and grew. He was their son coming back to claim his place. And from Langkawi he will take back their country from the corrupt and dedak infested najib razak.
And again for Tun Mahathir, he had somehow turned a minus into a plus. And out of it all, he emerged stronger, more deserving of Langkawi's love, respect and votes....and all this was done with the grace of ALLAH the most Merciful and Forgiving!