"Against stupidity; God Himself is helpless." 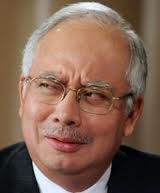 KUALA LUMPUR, April 19 — The prime minister’s announcement today that every adult Malaysian will be given a 1 Malaysia email account has triggered multiple online protests by those dead set against the RM50 million project.

“Please use OUR money in the correct way, upgrade our broadband, subsidy gasoline, remove credit card tax or whatsoever! We already have our own email account (gmail/yahoo/hotmail/etc) which is free, we no need 1Malaysia email account. Totally disappointed to your motto and actions,” said another fan.

The Performance Management and Delivery Unit (Pemandu) has been forced to go on damage control since the announcement was made earlier this afternoon.

Pemandu has clarified that the government will not be financing the 1 Malaysia email account and that it would not be made compulsory.
But questions remain over how Tricubes Bhd, in danger of being delisted from Bursa Malaysia due to financial irregularities, will finance the project.
Najib announced today that all Malaysians aged 18 and above will be given secure 1 Malaysia e-mail accounts that will allow direct and secure communication between the public and the government.

YA ALLAH, Oh GOD…..not another test of our patience! Not another foolhardy attempt by this Barisan Nasional government to involve the Rakyat to try and save a company that is in danger of being delisted from Bursa Malaysia due to financial irregularities! And pray tell me where is this company that is already having financial difficulties able to come up with RM$50 million to finance this project?

When will this company come up with its first “proposal” to impose, steal, rob or simply take money from the Rakyat by imposing a non refundable, legally compulsory minimal fee for services rendered in providing this 1Malaysia e-mail account for every Malaysian? And of course this fee for services rendered, to nobody’s surprise, has already been approved by the Barisan Nasional government?

They will start with the rural Malays first. Felda, Risda and all the da da da will finance” these “fees” for the 1Malaysia e-mail to all Malays under their scheme  - even those without a computer! They can always buy a computer later through a “generous” loan scheme provided by this same “Tricubes” at interest rates that will be laughable but approved by the BN government. Just as they have provided finance on the never never for those who wanted to buy the Protons and Kanchils. Five years loans with no down payments etc etc! Never mind that these Malays cannot afford to pay the monthly payments, what more the interest! Never mind that the computer will die a natural death long before these poor Malays can pay of these loans!  But of course these “investments” are necessary in order to bring the rural Malays on par with the “others” that are clamouring for Ketuanan Melayu to be scrapped and consigned to the rubbish dump!

UMNO will do any deed; spend any money to make sure that Ketuanan Melayu will be a reality for the Malays – no matter what the final costs will be to the Malays!

Who is in Tricubes? Rosmah has in interest through nominees? Najib’s children about to venture into business? Which UMNO warlord has direct or indirect holdings in this PLC? Or is this another Fleet Group, Realmild or UMNO Holding Company subsidiary that has been “approved” to be the workhorse to channel funds for the coming general elections?

Do not let this UMNO “project” be forgotten when the 13 General Election comes. You are one, with me we are two. Who else will join us?
Posted by STEADYAKU47 at Wednesday, April 20, 2011