There are a few things I would suggest you never do in life:
I do not know if the 3Latuks headed by that Rahim Thambi Chik ever did item number one and two but they sure did item number three when they did their thing with the "Carcosa" incident. As Forrest Gump said "Stupid is as stupid does". Let me explain.

Federal police CID deputy director Datuk Acryl Sani Abdullah Sani said police did not dismiss this possibility as it was an offence under Section 292 of the Penal Code, to screen pornographic material. On March 21, the sex video was screened for several selected journalists at Carcosa Seri Negara, here. The mystery of the "Datuk T" trio comprising former Melaka Chief Minister Tan Sri Abdul Rahim Thamby Chik, businessman Datuk Shazryl Eskay Abdullah and former Perkasa treasurer Datuk Shuaib Lazim was uncovered on March 23 when Rahim and Eskay admitted at a press conference that they had screened the sex video for the group of journalists

Asked whether police had the power to arrest the individuals involved in the sex act, Acryl Sani said police did not.  "There is no legal provision for the police to arrest and take statements from them. We have to refer the matter to the A-G's Chambers for any review," he said.

The same CID Deputy Director states that there is NO legal provision to arrest or take a statement from the individual involved in the sex act.

Put simply: The focus of ANY investigation will be on the stupid three stooges, namely:

First question I want to ask the 3L  - how come there are three of you? Why, is there safety in numbers when you are doing stupid things together? Humsup punya Latuk!

Oscar Wilde said “Whenever a man does a thoroughly stupid thing, it is always from the noblest motives.”

Aisehman Rahim that is a bit rich is it not? Were you not the Chief Minister for Melaka once? Were you not thinking when you raped that underaged Malay school girl or did you allowed another one of your organ other then your brain to do your thinking for you then? 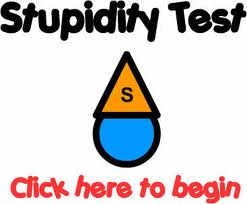 No amount of drum beating, smoke screen or just plain silap mata should distract anybody – especially PDRM and the AG (that means the Attorney General lah!) from doing the right thing – the arrest of the three stupid idiots for committing an offense under section 292 of the Malaysia Penal Code – that should shut those three stupid idiots up good and proper! As I have said before "Jangan luduh ka Langit"....