"I have just spoken to his daugher-in-law. Unfortunately there is no hope. The medications are now being withheld and his breathing tube has been removed. He is not expected to survive. He is in and out of consciousness and it is only a matter of time".

Sad news. That message came to me over our Kolej blog just a few minutes ago. Mr. Ryan was our headmaster at MCKK – the last expatriate to head MCKK. A remarkable man whom we called our own from the time we first met him at Kolej.  From then on, for the rest of our life he was part of our life. Our family knew about Mr, Ryan, our friends knew about Mr, Ryan and our lives stopped for Mr. Ryan whenever he would be around our space in his frequent visits to Kuala Lumpur. You do not ask each other if you would like to go and see Mr. Ryan, When he was in town we just tell each other where and when and when we are around him the old days came surging back into our life.

The last time I saw him was at Anwar’s house some years back. Anwar was away so Azizah was host. I was a bit taken aback to see that he had aged considerably and not in the least conscious of the fact that I was already 63 years old then! Apart from that Mr. Ryan was his usual self. Sharing himself with everybody and answering the same question that everyone kept asking him…his health, where he was now staying, his work……and of course the standard “Do you remember me Sir” And as always Mr. Ryan was gracious and totally unaware of the reverence that we all had for him from MCKK days until now.

I have had my experiences with him but one stands out above all else. I was then working in a Pizza Hut in the Adelaide Hills. It was early evening and then out of nothing, I told myself that Mr. Ryan was close by. He walked in just as I looked towards the entrance! He was in Adelaide for a visit and just happened to come to that Pizza Hut.

Sometimes in our life there are individuals that touches our life and give us a reason to believe in the goodness of others who really have an interest in what we become and do in life. Mr. Ryan was one such individual. I pray that he will recover. 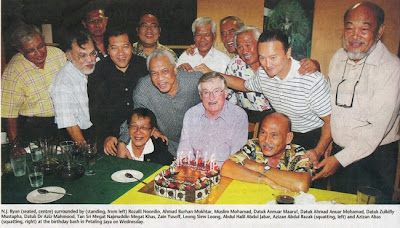