A Plea on behalf of that Son of Ali 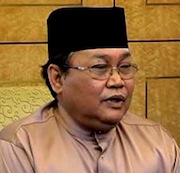 I hope that you will all try to understand the situation that this Son of Ali is in. We need to give him time – time for him to rise to his level of incompetence. There have been many times in the past when I was sure as hell that he has reached his maximus  optimus but it was just a silap mata by Yem. I think we know him well enough to call him Yem instead of that more familiar “Berahim Beruk” affectionately used by the people in his electorate and by his friends behind his back...his UMNO friends!

Remember when this Son of Ali went boldly where no Pakatan Rakyat politicians has even went? He authoritatively  commented on the activities of the “Good Wife Club” where he reiterated that he was in agreement that the “wife must do her husband bidding” …with particular emphasis on the need for the wife to concede every time her esteemed better half insisted on doing the horizontal mambo! We all had a good laugh when a visual of Yem doing the horizontal mambo flashed through our overactive mind…good of Yem to crack a joke at his expense. Anybody else doing the horizontal mambo would not have raised even a chuckle from most of us but just the thought of this Son of Ali doing that mambo is priceless….with his roly poly dimension I guess rolling of the bed is an occupational hazard!

If that was not enough he is now sharing with us the “boldness” of his decision to stay away from the Bersih rally. I can sense that some of you are already thinking that I am going to ridicule Yem for not having the guts to face the tear gas and the whacking from the Riot Squad. Far from it…I know that Yem is just acting out his two phobias. He cannot stand rejection and he cannot stand pain:

To stand as an independent means that nobody wants you : REJECTION.

The “PAIN” is what he knows he will feel when he gets whacked by PDRM.

Say what you like about this roly poly Yem he still can understand that there is a connection between PAIN and positive emotions. While some people inflict pain on themselves (i.e self injury) to make themselves feel better because pain do lead to a decreased in activity in the areas of the brain associated with negative emotions, Yem understand that pain inflicted when the Riot Squad whack you is simply that : PAIN. Knowing this he sensibly opts to stay home during the Bersih Rally….so there is a method to his every action.

Now by this “do nothing” bold action of his Yem has avoided stagnating at his present level of incompetence. He has now “risen” another level and gets closer to attaining his desired level of alpha incompetence – which is where Najib, Muhyiddin and that Din guy is now at!

Now how dare anyone call Yem a coward! An idiot maybe. A stupid idiot probably! A stupid blithering idiot most likely…but a coward?

Ibrahim said two other reasons lead to his "bold decision" to call off the rally - the decree issued by the Agong and another by the Selangor sultan against street demonstrations, as well as his intention not to divert the police's effort in dealing with the Bersih 2.0 rally.

In his own words Yem had to take into account what the Agong and that Selangor Sultan decreed against street demonstrations….and then there is also the interest of the Malays to consider and what the Police has asked the people(including I guess a personal appeal to Yem himself) to cease and desist from gathering on KL streets. So in essence Yem listened and heard what the Agong,the Sultan and what the Police have wanted him to do….but I also have a sneaking feeling that the fact that he is a bit too generously proportioned to be able to run away from the Riot Squad and the tear gas canister might also play some minor and insignificant part in his decision to stay away from the action on the streets of KL that day. Can you picture Yem running helter skelter away from the Police?...not a pretty picture to visualize. And what if he fell? All the kings horses and all the kings men could not put humpty dumpty together again…now who could put Yem together again? Die lah.

Yem is no coward…he just does not want to get hurt lest he is unable to perform his duties as a husband (and please no wise cracks about his sexual duties)…… looking at Yem I would think that in as far as his wife is concerned Yem duties as a husband would more involve activities like going to the market than activities of the sexual kind!

Speaking for myself I pride myself on having eyes like Brad Pitt(two) but every other parts of my self sucks (go ask my wife!).


According to Yem, “they” say that Perkasa is a wise organization (so by inference he is a wise leader). That Perkasa is not militant (then he is a General without an Army) and they say that Perkasa is not extremist. He has got all the bases covered except one. How does a General of his stature…or should I say how does a General in spite of a stature like Yem win a battle against Bersih without fronting up at the battlefield? I guess he will have a perfectly logical explanation for this too …but for now this Yem guy is going to be filed under “AJAIB TAPI BENAR”….or in the words of a favorite TV series…"Tales of the Unexpected”....so please do not forget my plea...let this Son of Ali raise himself to his level of incompetence so that he can then join those that have reached that level many moons before him...Najib, Muhyiddin, Nazri,the Tan Sri who raped that Malay School girl while he was Chief Minister of Melaka, that Raba Raba ambassador in Washington...etc etc.
Posted by STEADYAKU47 at Saturday, July 30, 2011