“Goverment must be prudent in spending tax payers’ money”

How to become a MILLIONAIRE at retirement? How Pillay does it?

“Getting kickbacks from subcontractors and suppliers of the 500 million per year Hospital Support Services Privatization Projectthat was awarded to three (3) Concession Companies.”

He obtained his Bachelor of technology in Civil Engineering at the Indian Institute of Technology, Madras India. Subsequently, he obtained his Masters in Public Health Engineering and PhD in Preventive Medicine and Environmental Health.
He was the culprit responsible as Director of Engineering Services, Ministry of Health
(conspired from inside the ministry) for the RM 500 million per year Hospital Support Services Privatization Project in 1997. He PROUDLY claimed for its SUCCESS! The concession period granted well over 15 years. He was also the Government’s Technical Supervisor of the project dealing with the Concession Companies; Radicare Sdn Bhd, Faber Mediserve Sdn Bhd and Tongkah Medivest Sdn Bhd. He was the bastard that drawn up the one sided concession agreement in favor of the concession companies. He was also KNOWN to be the protector and broker for the concession companies while in the Ministry of Health. 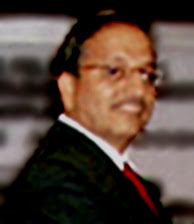 Currently, free to enjoy the millions made for being the key person for the concession companies, in particular kickbacks from the sub-contractors (hand-picked and recommended by him). Recently, after his retirement as Deputy Director General, a few of the sub-contractors begin to feel the PAIN in meeting obligations (the final BIG payoff). Now, Ministry of Health is left with the BURDEN and facing the CASH constraint due to the recent 10% BUDGET CUT imposed on all ministries. YES! The EFFECT of one man who was instrumental in conceptualizing the IDEA, conspired and succeeded to siphon BILLIONS of public fund. A very CLEVER and DANGEROUS man!!!
Similarly, he was the culprit as Deputy Director General responsible for Planning Division and allocating budget to 9Bio. Now, he is the new appointed Chairman of 9Bio. Watch out 9Bio!!!
He is ever willing to play ball (sidekick and YES man) with Tan Sri Dr Ismail Merican in return for the outstanding projects in the pipeline under RMK-9.
Guilty as charged! We rest our CASE.
Posted by STEADYAKU47 at Tuesday, December 27, 2011