Sealamat Pagi! Like it or not we are all waking up this morning to this furor over ‘Bendera YAB Dato Seri Najib’ (Pemuda UMNO’s word not mine!) that has been disrespectfully taken down from where it is ‘berkibar kibar’ in front of UMNO HQ at PWTC by Adam Adil who is a member of Solidariti Mahasiswa Malaysia. And so by extension, UMNO, BN, PDRM and all the relevant goons are now going all out to not only lynch Adam Adil but also with him,  SMM!

Now let us back off a bit.

"A flag is a piece of fabric with a distinctive design that is usually rectangular and used as a symbol. National flags are potent patriotic symbols with varied wide-ranging interpretations".

Since when has Najib got a Flag? Is this ‘Najib’s Flag’ a symbol for UMNO, for BN, Pekan or just for his Family? First off if it is for his family then it should have been an image of Rosmah on the flag NOT Najib!

Or was this ‘Flag’ just a banner with an image of Najib fluttering in front of UMNO HQ as a decoration to make UMNO HQ more ‘friendly” – quite like us putting a poster of Paris Hilton in our bedroom for medicinal purposes! If so then I would suggest a flag with Paris Hilton would be able to do that better then a flag with Najib’s image.

I can even see Najib nodding in agreement on this one!

Another worrying aspect is what is this Bendera of YAB Najib Tun Razak suppose to be a symbol of? If it is a symbol of Najib himself then the first thing it is a symbol of is the murder of Altantuya! Then the purchase of the Submarines through that middle man call Razak Baginda and his commission of RM$500 million! Najib’s abuse of his executive power while Minister of Defence…and of course his lack of balls and guts to face DSAI and Pakatan Rakyat on a level playing field come the 13th general elections.

Now Pemuda UMNO says that what Adam Adil did to the flag was disrespectful, This is what Adam said he did: 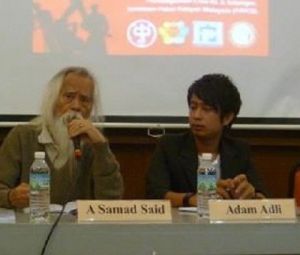 “I was holding on to the flag the whole five minutes so as to not step on it or let anything happen to it. I was fully aware on how to respect the flag. I didn’t even leave it on the floor. Even if the guards didn’t tell us to raise it up again, I would have done so myself” .

Now consider what these Pemuda UMNO did to a banner/flag of Tok Guru and Hadi of PAS: 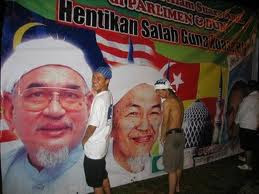