The Lightness of being Najib. 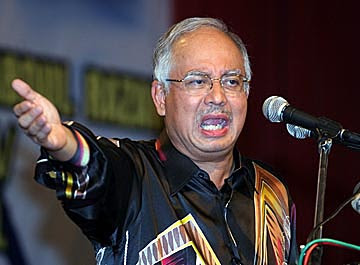 It is not always possible for us to understand why our Prime Minister makes certain decision. We cannot be privy to information that Najib has over matters that could affect national security. Certain information if made available to us would compromise the security of our borders. There are information that could disrupt our foreign relations with Singapore or our Asean neighbors. So please be mindful of the fact that our Prime Minister makes decision based on all these considerations.

He would also have the Cabinet to consult before making these decisions. For every decision our Prime Minister makes he would have aides, advisers and consultant who will tell inform him of the consequences of the decision that he makes.

So pray tell me how come he makes so many dumb and stupid decisions?

If you want to look at ‘isu semasa’ it has to be this Sharizat NFC debacle. Anyway you look at it, from any angle and at any stage of its unraveling, you can see flashing neon lights above NFC and Sharizat telling Najib “Vote Loser!” “Vote Loser” I can see it! Anon can see it! Even the UMNO goons who double up as those idiotic cyber troopers can see it! So how come Najib cannot? How come Najib did not throw her overboard from his sinking ship from day one and have one less problem to worry about?

Is it possible that I am smarter then our Prime Minister?

I did not dare to even think that this is possible. After all he is in charge of Malaysia. The Generals in the Army and PDRM listens to what he says. All the KSU’s of the various Ministries ask him how high when he tells  them to jump. And yet this Prime Minister of ours does a few stupid things….ok lah many stupid things! Why?

As Prime Minister I would not have allowed my Minister of Education to appoint a Muslim to head the Catholic owned SMK Convent Bukit Nanas. It is just plain common sense. Who in his right mind would appoint a Catholic to head the Kolej Islam Antarabangsa?

Did this Najib think only about the votes he MIGHT get from the Malays who might think him ‘gagah’ for making an obviously ‘ketuanan melayu’ decision. And how many extra Malay votes can he possible get? Ok lah kasi dia 50,000 votes! Against a potential loss of 1 million Catholic votes!
Did Najib not do the sums? Obviously not! What about his advisers? Obviously they gave him the wrong advise! Again!

Everyday I see Najib do what he must not do as Prime Minister of our Nation. I am not talking about Najib making minor faux pas that can be attributed to pressure of work or having to much on his plate at any one time. After all he is Prime Minister of Malaysia!

No not that at all…I am talking about doing things that makes us go ‘Hmmmmm” this guy is a chendol missing the gula melaka and santan! He is rojak without gravy! Nasi Lemak without the sambal....get my drift? He is just not that bright.Is he really PM material?

Najib seems unable to understand the trade offs when he makes decision. He does not understand that while he might gain few thousand Malay votes by his gung ho decision to appoint a Muslim to head a Catholic owned school the trade off is aggravating 1 million catholic voters! Najib no kapish!

Now this gay marriage between a Petronas sponsored MALAY Malaysian student and his lover in Ireland is another potential NFC situation for Najib. Shades of Saiful…… it cuts both ways. Najib cannot play to a gallery of those who are horrified at what this Malay Muslim guy has just done while trying to be Mr Cool at the same time. So what to do? Don’t ask me. You are the PM!

This indelible Ink situation for the coming general election will be another ‘Vote Loser” for Najib if he does not handle it right. Perkasa is right on the ball and jumps into the arena head first without any protective head gear….or maybe for Perkasa a head gear is no good because they have already brain their damage...or is it the other way around? Now what will Najib do?

May I suggest this Najib…this is something the people want- so go with the flow. Do NOT make any comments about elections in Malaysia being open and free….even if (ahem!) you believe that it is so. Just go with the flow and tell Perkasa to hush their mouth and take back those threats of not voting! UMNO needs all the votes that they can get! You know who has been buttering Perkasa’s bread. So call in your markers and read the riot act to that son of Ali. I know he has enough fat on him to last a few weeks in Sungai Buloh (ISA still on kan?) but with Berahim you know what will move him….negotiate a quantum!

In the coming days – 9thSaiful come to fruition. But did if ever occur to you that what ever the court decides - the winner is still Pakatan Rakyat?


If DSAI is convicted the public belief that it has all along been a politically motivated trail would be vindicated! And if DSAi is acquitted….you better go crawl into a dark corner and live amongst the cockroaches  - who I think will be about the only living thing that would tolerate your presence.

Fikir lah sikit Najib before you do anything. If you think putting DSAI physical self in jail is victory then you are stupider then I though you were – if that is at all possible! Panggil bodoh marah pulak!

Stone walls do not a prison make
Nor iron bars a cage;
Minds innocent and quiet take
That for an hermitage;
If I have freedom in my love,
And in my soul am free;
Angels alone, that soar above,
Enjoy such liberty.
Richard Lovelace (1618–1658), To Althea, from Prison (1649)

One word of advice Sir. If at first you don’t succeed, give up…you are a loser.
Posted by STEADYAKU47 at Thursday, December 22, 2011