By Karamjit Singh
The week of January 12, 2009
The chapter on Harnessing Science, Technology and Innovation in the Ninth Malaysia Plan says the development thrust for the 2006 to 2010 period will be to harness science, technology and innovation to raise the nation’s capacity to acquire and utilize knowledge and foster innovation.
As with all blueprints and government action plans, the words used are action-oriented and forward-looking, but like many government intentions, the action statements are seldom worth the paper they are printed on. A classic example is the inaction and unproductive activity at Ninebio Sdn Bhd (9Bio), a wholly-owned company of the government.
On the website, www.ninebio.com, the company says it will focus on the R&D of vaccines, biologics and natural products and services. The brains behind the idea – the people in the Ministry of Health (MOH) who launched it as the 7th National Institute of Health in 2003 – felt that it was important to take a cluster approach to this, where a centre of excellence will be built to gather all the experts on vaccines, biologics and natural products in one place.
This approach, while fine on paper and doable elsewhere, especially in the Silicon Valley, is unlikely to work in Malaysia yet, where the research and academic culture is not one of openness and sharing. That is the opinion of Prof Dr Abdul Latif Ibrahim (formerly the managing director of the National Biotechnology Directorate), who is now senior professor and director of BIO-IT Centre Selangor, Unisel. According to Abdul Latif, throughout his career, he has observed two main challenges in this area. “Firstly, our academics are reluctant to work together across universities as there is a lot of competition and even jealousy among them. Secondly, we do a poor job of sharing facilities at our universities with outsiders, be they from industry or other universities. The fear here seems to be that with inexperienced people using expensive hardware, equipment will get damaged. As a result, the high-tech facilities in our universities are frequently under-utilised and that is a real shame.”
While Abdul Latif does not know enough about 9Bio’s plans, he hopes it can overcome these issues.
Whatever the approach and however grand its vision and mission statement, the project has gone nowhere in the last five (5) years, beyond changing its name to the Malaysian National Institute for Natural Products, Vaccines and Biologicals, signing a joint-venture with an American vaccine maker and having the Ministry of Finance step in to take over when MoH could not solve the issues surrounding 9Bio.
Interestingly, not many in the biotechnology industry seem to know what 9Bio is doing. “It will make absolutely no difference to the biotech sector if 9Bio just disappeared,” says one entrepreneur.
Apparently, 9Bio started out with only one person – its then CEO Datuk Dr Nor Shahidah Khairullah. She was removed in May last year and a new CEO – Prof Dr Mohd Azmi Mohd Lila – was appointed last week. Mohd Azmi is an ex-academic from Universiti Putra Malaysia (UPM), who until last year was director of investment at Malaysian Technology Development Corp, handling the biotech and life sciences area. He also served as the director of the Institute of Bioscience while at UPM.
Mohd Azmi did not return messages left on his mobile phone to comment on his mandate at 9Bio.
At the same time, 9Bio’s current chairman, Datuk Ir Dr Mukundan Sugunan Pillay – a retired deputy director-general of health (research and technical support) with MoH – who replaced Tan Sri Aseh Che Mat (now the chairman of Pos Malaysia Bhd) on July 15 last year is himself to be replaced by Raja Datuk Zaharaton Raja Zainal Abidin, the ex-chairman of Technology Park Malaysia. Efforts to reach the latter were unsuccessful.
While 9Bio has not done much since its inception, there is intrique over the departure of Nor, but she has declined to meet The Edge to give her side of the story. Those who have interacted with her say she is a very capable, ambitious and smart woman, but she also tends to step on toes when she does not get her way.At some point, MoH appointed a COO – Izam Yusuf – who was with KUB Malaysia Bhd before joining 9Bio.
9Bio’s only significant achievement was to get the recognition of the Organisation of the Islamic Conference (OIC) as a key centre for halal vaccinations. This happened in December 2007 in Kuala Lumpur.
The new CEO will have everything to do when he comes in because even 9Bio’s existing  staff are hoping he will provide them with a clear direction and strategy. This is amazing considering the company has been around for five years. A leading player in the biotech sector says it is urgent for Azmi to draw up a proper business plan for 9Bio, indicating where it will fit in the existing value chain in Malaysia. He feels 9Bio should not replicate infrastructure that already exists in various universities in the country but identify which players in the ecosystem it needs to work with and how it can complement and enhance the ecosystem.
Critics cite the plan to spend RM1.2 billion on its centre in Enstek Park in Nilai, Negri Sembilan, as a classic example of how money is thrown at a problem without honest assessment of the core challenges – as mentioned earlier by Abdul Latif – and addressing the more critical human capital issues.
Mohd Azmi and Raja Datuk Zaharaton  indeed have a lot on their plate when they get to work this week, beginning with what they actually plan to do and how it will add value to the biotech ecosystem in Malaysia, and then defending the RM1.2 billion structure coming up in Nilai.
Background history! 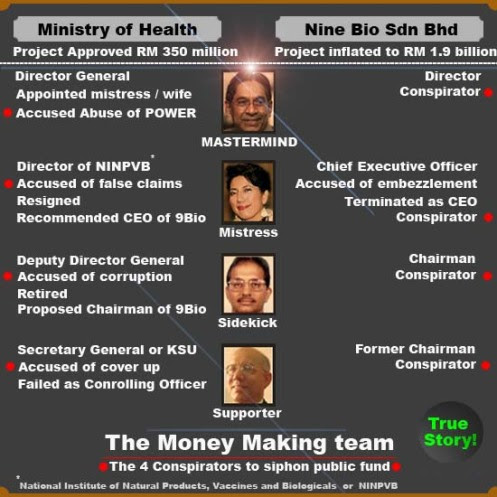 Email ThisBlogThis!Share to TwitterShare to FacebookShare to Pinterest
Labels: 9Bio