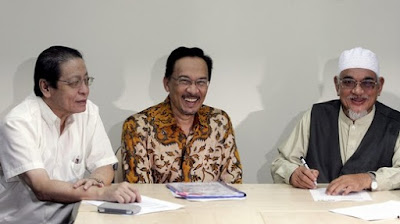 In all the madness that prevails in our body politic it would be difficult for anyone to discern what is fact and what is fiction, what is truth and what are lies and for us to decide what is right and what is wrong. Politicians being who they are would be the last person for us to go to should we want to try and make some sense of what is really going on. What are we to do then? How do I decide what I should write about and what I should not?

As I have said before whatever the verdict Najib and Barisan Nasional have already lost the battle to Anwar. A guilty verdict would damm Najib as being a coward having to resort to a tainted judiciary to rid himself of an opponent he is unable to match at any level. An acquittal for Anwar would forever damm Najib at the polls.

Pakatan Rakyat and Anwar’s responsibility now is how to maximize what ever political gain they can muster from this tactical error of judgement by Najib and his goons in taking Anwar to court over sodomy two! Please note :

We do not want Pakatan Rakyat or Anwar to make the same mistake that they made after the 12th general elections. That time they took their eye off the ball! Remember the empty promise of a 16th September takeover of the Federal Government and the loss of Perak? And the subsequent loss of MP’s to Barisan Nasional? And Pakatan Rakyat has yet to fully recover from those unnecessary gaffe!

Now again this UMNO goons are handing another “opportunity” to Anwar and Pakatan Rakyat. Carpe Diem! But what is happening? I do not have to tell you what is happening – you can see it for yourself.

-      Pakatan Rakyat chooses to do nothing to ‘rock’ the boat until a verdict is reached.

-      PKR being PKR is awash with tales of treachery, factionalism and opportunism even as their leader awaits his fate.

And of course UMNO is at their very best in making the best of a bad situation – disturb the already muddy waters that the opposition seems to be in and confuse them even more!

All that we ask is for Pakatan Leaders to use their common sense: Pay attention to the obvious! We all see what is happening within PKR – DO SOMETHING ABOUT IT. Do not say it is for PKR’s to ‘manage’ their internal affair. We have seen how they ‘manage’ their party elections – DAP And PAS must ‘campur tangan’ now and come up with an acceptable solution in consultation with Anwar – while he can still be consulted! Do this now and people like me will have no reason to keep sniping at Anwar, PKR or Pakatan Rakyat!

But if you choose to be quiet and close one eye and shut the other then not only us, but those UMNO goons will go to town at the perceived weakness of Pakatan Rakyat to not be able to take advantage of a already bad situation – i.e. Anwar’s pending conviction on sodomy two. Pakatan Rakyat now already has the high moral ground that UMNO and Barisan Nasional have repeatedly failed to hold on to. Do not let them regain it back again by your inability or refusal to seize these gains and make it yours permanently!
Posted by STEADYAKU47 at Friday, December 30, 2011