“Goverment must be prudent in spending tax payers’ money” 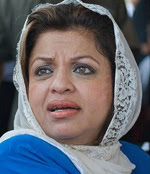 We have received complaints regarding the generous soft loan of RM250 given to Agroscience Industries Sdn Bhd that belongs to Datuk Dr. Mohamad Salleh Ismail (Datuk Shahrizat Jalil’s husband) and confirmed by an industry insider. Datuk Salleh was the former head of Technology Park Malaysia (TPM) and the current Chairman of IJN. Based on the info received, National Feedlot Corporation Sdn Bhd is very much controlled by family members (son and daughter) operating from a posh office at 3A01, Block A, Pusat Dagangan Phileo Damansara 1, No. 9, Jalan 16/11, Off Jalan Damansara. 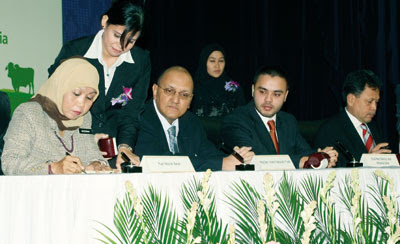 From left: Representatives of the Finance Ministry Norizah Bahari and Datuk Ibrahim Mahaludin Puteh, Izran and Mohamad Salleh at the signing of the loan facility agreement with between the government and NFC.
The project was masterminded by Rosli Mai Lam the director of Lazuli Sendirian Berhad and also a partner in this project. Dr Rosli of Lazuli as known to the players in the industry only out to make MONEY by supplying cattle and other complementary supplies to anyone entering livestock industry in Malaysia. Most instances, almost everyone interested in the easy commissions on the supply of livestock from Australia, New Zealand or Mexico.

Based on our initial investigation, the official announcement was made by Tan Sri Muhyiddin Yassin when he was Minister of MOA (Ministry of Agriculture).

Agriculture and Agro-Based Industry Minister Tan Sri Muhyiddin Yassin said this was because beef price in the world market had increased, and without entering into contracts with beef-suppyling nations such as Australia, there would be no guarantee of continuous supply and stable price.
He said this was also in line with the government’s aim of increasing beef production to 40 per cent by 2015.
“I have suggested the setting up of a consortium to import cattle for farms in the country on a continuous basis.
“I have met the biggest Australian beef producer and supplier which is keen to collaborate with Malaysian beef suppliers,” he told reporters after opening the “Beef Production Industry Development” seminar here today.
Muhyiddin said the consortium would be set up in two months’ time and the ministry had proposed that National Feedlot Corporation Sdn Bhd lead the consortium.
Reported by BERNAMA February 18, 2008

Objective of the National Feedlot Project: To meet the rising demand for meat, the development of the beef industry will be implemented through the establishment of theNational Feedlot Centre. Based in Gemas, the National Feedlot Centre is a joint project between Negeri Sembilan and the Federal Government through the Ministry of Agriculture and Agro-based Industry (MOA) and is expected to be instrumental in attaining the targeted 28% self-sufficiency level for beef production by 2010. Mandated as an integrator for the project, National Feedlot Corporation Sdn Bhd is owned by Agroscience Industries Sdn Bhd with participation from the Government of Malaysia. Its commercial interest is the development of a planned, integrated and sustainable Malaysian beef industry through the development of the fully integrated livestock farming and beef production facility that manages the import of livestock, feedlotting, slaughtering, processing, packing and marketing of beef in Malaysia.
Our Chief I.O has gathered enough evidence to date and started on verification process to study the case in greater detail based on the initial lead given by the industry insider.