Something is rotten in the state of Felda!

Something is rotten in the state of Felda! I am not schooled in corporate matters. Never bought a single share in my whole life....not even Amanah Saham Mara or even partake in any takeover, buy over or over over of any PLC, GLC or the ROC. But I have got enough sense to work out that since Isa Samad The Convict was parachuted into FELDA the smell of easy money (for the privilege few!) seems to be wafting all over Putrajaya and a few UMNO bastards and their cronies are salivating at the thought of easy money to be made from FELDA by the lorry load!


The same FELDA that is:


And now FELDA has become the latest darling of the hideously rich and infamous of the UMNO crowd led enthusiastically by that Convict Son of Samad!


Of course he must first have have pliable and 'friendly' faces within FELDA to make this 'corporatization' of FELDA possible. Hence the reshuffle of senior management to put into place the 'accomplices and co conspirators' of this Convict Son of Samad!


What is nauseating is that we have seen all this done before and at the end of the day the UMNO Malays and their cronies  strip FELDA of any potential gain from this exercise while they waddle off with tons and tons of FELDA's and our money into the sunset of their decadent lives.


I use to remember Najib's Father, the same Tun Razak, who traversed the length and breath of Malaysia to personally visit FELDA schemes and settlement because this was one of his rural initiatives that was dear to Tun Razak heart as he knew that FELDA was a critical initiative to get the rural Malays out of their poverty. 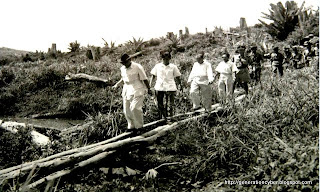 But to UMNO and Najib this is just another cash cow to be used for their own personal financial gain and who else but that Convict son of Samad to do their dirty deed for them!


What else will Najib and UMNO do next? I wait with a heavy heart as these UMNO goons get more and more creative...or should I say more desperate...in their final days in office ...to make hay while the sun shine!

KUALA LUMPUR, Dec 20 — Felda is among the potential buyers interested in Johor Corporation’s (JCorp) stakes in QSR Brands Bhd (QSR) and KFC Holdings Malaysia Bhd (KFCH), Bernama Online reported today citing an unnamed analyst.
“Felda can make a bid directly by offering higher prices than JCorp’s offer, but JCorp, as the controlling shareholder in KFCH and QSR, is still the one who makes the call,” the analyst was quoted as saying in the report.
JCorp recently partnered private equity fund CVC Capital Partners Asia Pacific (CVC), to buy plantation firm Kulim Bhd’s entire stake in QSR and KFCH.
Previous attempts to sell KFCH ran into objections from Malay rights group Perkasa, which insists the American franchise should remain in Bumiputera hands
Despite citing Felda’s interest, the analyst conceded it was unlikely for JCorp to unload KFCH at the present.
“It is impossible for JCorp to sell its cash cow although the group is loaded with debt and needs to settle RM3.6 billion by July next year,” the analyst said.
On Sunday, a JCorp official told The Malaysian Insider that the corporation’s move to take direct control of its food-related businesses last week will serve Bumiputera interests and lower its overall debt.
This followed claims by former chief executive Tan Sri Muhammad Ali Hashim that outside forces were orchestrating JCorp’s dealings and weighing the once-powerful state investment firm down with deb
Posted by STEADYAKU47 at Wednesday, December 21, 2011

Email ThisBlogThis!Share to TwitterShare to FacebookShare to Pinterest
Labels: Felda