Anwar Ibrahim: His heart is good. He means well. He has made his mistakes and he will certainly make more in the time to come but a good heart will trump everything else - even UMNO and Barisan Nasional.

Wealth without work
Pleasure without conscience
Science without humanity
Knowledge without character
Politics without principle
Commerce without morality
Worship without sacrifice.”
― Mahatma Gandhi

“You must not lose faith in humanity. Humanity is like an ocean; if a few drops of the ocean are dirty, the ocean does not become dirty.”
― Mahatma Gandhi

Many times in my life I have read words spoken by men and women much wiser than me and have been moved to think good thoughts and do good deeds....but then there have been times when the words and deeds of men and women drive me to distraction. Drive me to think thoughts that worries me because it shows me up for the person that I try very hard to keep inside me - the greed for material things, the hate for those whose deeds I hold in contempt and disgust, and the many other dark and evil thoughts that swirls inside my mind but are kept locked inside there by the fear that my peers would censure me as being sub human or worse - that I am evil incarnate!

Now what happens if my peers are evil incarnate themselves?

What happens if my peers are corrupt?

What happens when my peers care not for the common good of the many around them, take what does not rightly belongs to them and abuse the trust that others have put unto them?

What happens if my peers are people like Mahathir, Najib Tun Razak, Rosmah, Mahyuddin, Nazri, Zahid, Hishamuddin, Jamaluddin Jarjis and all those UMNO guys holding high public office, are in government and hold the destiny and future of our nation and our people in their hands?

Yes these people are in reality not my peers. I am but an old pensioner residing far from the maddening world that they live in but all those people that I mentioned above consider each other their peers....so imagine them all trying to live to each other's expectation!

The frantic grab for power, the need for greed, the ebb and flow of politics that is focus on the self rather than on the electorate and always the fear of losing everything because everything they do in their life is base upon deceit and deception!

This is the state of our nation today!

A state where by the things that our leaders do - corruption, arrogance and always putting self before anything else - our nation is drowning in a sea of despair and hopelessness because those in whom we have placed our trust to govern us have let us down.

We are also allowing our self to drown in the very same abyss that these leaders are now unwittingly drowning themselves in because we fail to understand that WE have allowed these things to happen by our complacency and our acceptance of the way things are.

Go back again to what Ghandi said:

“You must not lose faith in humanity. Humanity is like an ocean; if a few drops of the ocean are dirty, the ocean does not become dirty.”

I have not lose faith in what Malaysia can be because I believe that there are more good people in Malaysia than there are bad. One of them is this man : Anwar Ibrahim. 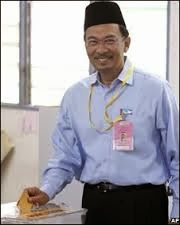 His heart is good. He means well. He has made his mistakes and he will certainly make more in the time to come but a good heart will trump everything else - even UMNO and Barisan Nasional.

We start with Kajang....give him your support because God knows he needs it! Sometimes Anwar gets ahead of himself but that is only because he knows that he has more things to do than the time to do it.

"SOME MEN SEE THINGS AS THEY ARE AND ASK WHY. I DREAM THINGS THAT NEVER WERE AND SAY WHY NOT"

Yes...why not Pakatan Rakyat in Putrajaya? Why not indeed!
Posted by STEADYAKU47 at Sunday, February 09, 2014