For those of you who yearn for men with honor and integrity to once again roam the corridors of power in our nation I fear that they will have long to wait for such a person. For now let us together remember one of them...the late Tun Ismail Ali....for whom, to honor and integrity, we can add duty to country before self, to be yet another of his enduring traits...truly one of our greats!


With thanks to Abdullah Ahmad and the SUN 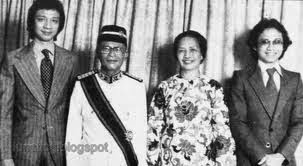 Tun Ismail Ali (1918-1998), for generations a titan of the Malaysian economic and financial world, is mourned as "a man of great integrity" who spent his long period as governor of Bank Negara to promote financial transparency, accountability, integrity, uprightness and good governance.

I have known him for 35 years since I was a young political secretary. It was my boss, Tun Razak, who knew Ismail well, who introduced him to me in 1963. Razak told me afterwards: "Tan Sri Ismail (as he was then) is a good man for you to cultivate and get close to. Clever and helpful if he likes you. You will find him strict as a ruler, unbending, his standards are high; a difficult role model worthwhile emulating."

I took to heart what Razak told me and went on to cultivate the governor. We became good friends which surprised many people including his senior officers, advisers and my colleagues. The last time I met him was at the prime minister's office in early June as he was leaving after attending a meeting (I think, of the PNB board of trustees). I had gone there to meet Datuk Seri Dr.Mahathir Mohamad.

We spoke briefly and agreed to meet before I left for New York. Somehow, I had a feeling that would be our last meeting and it was.

He was very frail and walked with the help of a walking stick while a man assisted him. I asked a good friend to arrange for an appointment. She told me it might be difficult because that week he was busy with his niece's akad nikah and wedding. I did not press and left for New York.

Notwithstanding his frail condition, news of his death on Prophet Mohamad's birthday (Monday, July 6), aged 80, stunned me. He was a good friend, always charming and courteous and always accessible even when I was out of government and became a non-person.

Ismail combined a quiet introspective style of leadership with intensely strict codes of financial and economic management and for years he struck terror to bankers and officials alike. But none should have feared him unless he was the hit-or-miss type, unprofessional, unscrupulous and dishonest.

His death is a colossal loss to the nation. Ismail left an indelible impression of integrity, a high standard of morality and an august sense of righteousness and justice.

The governor was from the old school, a fast dying breed. He was a Queen's scholar from the Victoria Institution at Cambridge University (Trinity Hall). When he returned, he was absorbed into the prestigious Malayan Civil Service (MCS) and served as economic minister at the Malayan embassy in Washington (1957-60), returning home to become deputy governor of Bank Negara and within two years its governor in 1962.

Conversations with Ismail turned back time into several periods of Malayan and Malaysian history to the days of the British Raj, early years of independence and Malaysia. He was a marvelous "oral historian", recalling memories from long ago, of Malay poverty, of grandfathers who struggled to be free of British imperialism and Malay feudalism, of a father and mother who instilled in the family that "knowledge is power", of contemporaries who helped ignite nascent Malay nationalism and of relations and friends who fought for merdeka.

His recounting was rich and strong on scruple. He not only described the events but dared to explain them to me and he did so to my admiration with dignity, eloquence and a lesson in brevity. What a pity and a great loss to posterity because, as far as I know, he never put them down in writing nor the archives nor did any of the universities approach or record him. I stand corrected, of course.

The death of a man of Ismail's stature an d scholarship distressed me. It always evokes. in me of a lost era, a great period when honour and integrity reigned supreme.

The legends about Ismail are many. Some have been made up by his enemies and therefore little that was bandied around could be taken as truth even if they sounded right. I will add this true story to the chronicle.

It takes uncommon courage for any man to defy a prime minister or deputy prime minister (of Razak or Tun Dr. Ismail and Abdul Rahman's stature). He must be on a strong moral ground and have impeccable integrity to undertake the perilous task. Ismail was such a man.

Three times he ignored Razak's instructions and he survived. Two of the three involved banking licences and the other a finance company's licence. Ismail eventually relented on the finance licence and approved the establishment of one of the banks whose original name has been changed following a takeover. But he was resolutely opposed to the other application.

Razak sent me over to talk to him. He agreed to issue the licence on one condition which he and I knew the applicant would find a bit difficult to fulfill. Still, it was a gamble. Razak instructed me to call, the man whom we shall call "the front man". He said he could not produce the evidence Bank Negara wanted. In any event, the friend of the "frontman" now runs a bank.

Critics were divided about Ismail's strong leadership at Bank Negara. Some found him intolerably inflexible. They would have preferred a pliant governor. His admirers (few but well placed) thought he was a godsend governor to look after our banking system and a strong counterweight against Treasury politics and machinations.

The thing I always admired about Ismail was his integrity. He was a fierce man but he was also a noble gentleman, a rare combination.

Whatever people say about Ismail, he, much more than anybody else at Bank Negara, then and now, administered our money with prudence and evenhandedness. Indeed, he characterised an era which has since long gone.

We shall miss this great Malaysian, an indefatigable leader of men. People may say anything about him behind his back but his hands were cleaner, as was his life, than those who indulged in whisper, innuendo and allusion.

Tun Haji Ismail bin Ali is an excellent role model for young Malaysians to emulate. He should have been buried at Masjid Negara for he justly deserved the honour. Unless, of course, he gave instructions that he should be buried at Ampang next to his beloved wife, Toh Puan Maimunah Abdul Latif.

I called him Haji. Few knew that he performed the haj in 1971 the same year I did.

May Allah bless his soul.

(This article has been reproduced with the kind permission ofSun )
Posted by STEADYAKU47 at Sunday, February 23, 2014