cakap cakap...of the past the present and Life. 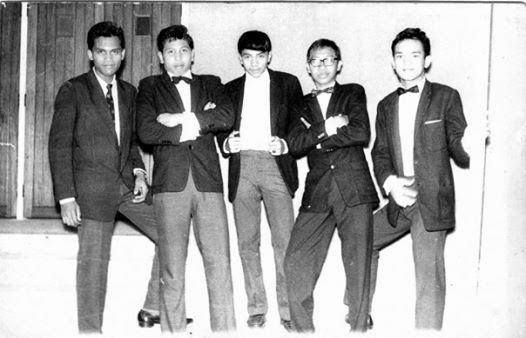 I am one of those people who are not burdened by too much memories of the past. There are many reasons why this is so....some because I choose not to remember unpleasant memories of the past, some because it happened in times too long gone by to still register in my head and some because I have crammed enough living to last many lifetimes in the six scores and seven years that I have lived and my memory cells are way past overload!

When I saw the above images from my MCKK years from Kassim's Ahmad facebook I stared at the image of myself (second from your right with spectacles, bow tie and folded arms)  and could not for the life of me remember myself posing suited with a bow tie amongst these friends of mine in what (if my memory serves me well) is in Hargreves Hall  - musicians all. I  can recognize Kassim to my left and Jet Nizar to my right and the other two looks vaguely familiar...and nothing else. What I would give to remember more of the situation and the circumstances of that image!

That is what life is all about.....memories.  Sometimes when I am alone and allow my mind to go where it wants I am suddenly confronted by thoughts of the past that stirs a sense of wonder and 'what if' in me........what if I then had the awareness of life as I do have now after 67 years of living.......how would I conduct myself then?

Would I have married at twenty one in London without my parents permission and without the money to even buy a pair of trousers for the wedding - what more a wedding ring?

Would I have left a decent paying job at Malaysian Nasional Insurance to sell burgers from a stall in Penang in my early twenties?

Would I have immigrated to Australia and allow my daughter to migrate to Canada?

The answers to all those questions would be a resounding "NO I will not!".

But all that did happened and the sum of it all is that today I reside in Melbourne, on pension from a generous Australian government with the same wife that I married in London at  twenty one years of age. We are happy that our son is with us in Melbourne and that our daughter is now settled in Canada with her own family.

All that has happened in between that marriage in Acton Ealing and our present abode in Melbourne has served to enrich our lives and made us what we are today - two pensioners contented with our lives and unable to work out to our satisfaction how it has all come to this wonderful time when we have all that we need in our old age....not all that we want for sure...but all that we need is more than what others would have in the twilight of their years.

The above images of my past has stretched my ability to recall the exact circumstance of that very moment but suffice to say that I know it must have been after or during one of those concerts at MCKK where I would be playing my accordion. I am not too sure whether it was the same concert where some of us dressed up as Red Indians dancing away around a pretend camp fire to the Shadows 'APACHE" with wooden Tomahawks held menacingly in our hands above our head!


And I smile thinking of me doing all that! Ahhh such is life.....and I remember that if it was not for Kassim (standing to my left in that picture) I would be the one playing on the Piano! Yes I resented Kassim for that and what do I care that he was a better Piano player than me! It could have been me playing the Negara Ku at every School Assembly that we had in that Hargreves Hall and not Kassim! And it would have been me playing "My Shawl" at the opening of every concert that we had! Instead it was Kassim!

But I have made my peace with Kassim....and my memories of our time together in MCKK and after are good. We caught up with each other at the sad time when his brother -The Ancient Mariner - the late Yusof Ahmad, my classmate, passed away a few years back.  The late Yusof encouraged me to write and posted some of what I wrote on his Ancient Mariner's blog. If only I could have told Yusof how happy he made me by doing so. Yusof had a way of  telling things as they are....he calls a spade a spade and was quick to do so without fear and favor! Our last email to each other was late on the night that he passed away. Imagine my feelings on being told the very next morning of Yusof's passing....such is life!

I am begging to run away with my emotions thinking of the ancient Mariner. Enough for now. It is past 1.30 pm and I must prepare lunch for that girl that I married at twenty one in London. She now has dementia and has herself decided a year ago to stop doing the things that she has been doing for most of her life for those that she loves - to cook, clean and be at our beck and call. I know this because she tells me so. And so now I will take up the slack and cook, clean and be at her beck and call......a calling I do because after close to 47 years of marriage there is nothing I would prefer to do more than take care of her. 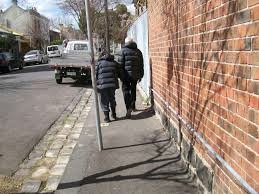