With thanks to Rubysydney Hamid 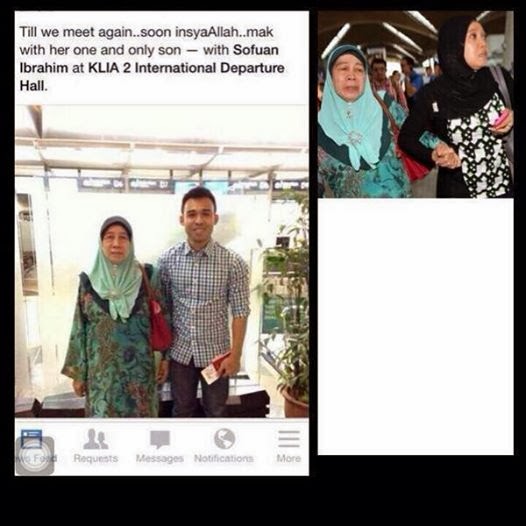 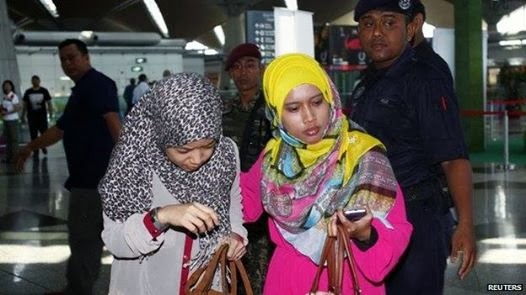 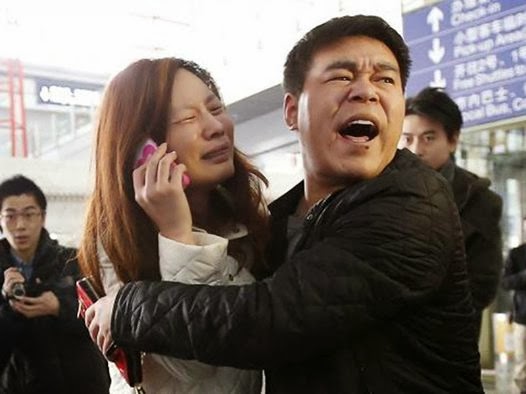 Hanoi (AFP) - Vietnam said its search planes spotted oil slicks in the sea near where a Malaysia Airlines jet carrying 239 people mysteriously vanished on Saturday, in the first hint at the aircraft's possible fate.
The announcement came more than 18 hours after flight MH370 slipped off radar screens somewhere between Malaysia's east coast and southern Vietnam, triggering an international search effort.
"Two of our aircraft sighted two oil slicks around 15 to 20 kilometres (10-12 miles) long, running parallel, around 500 metres apart from each other," the army's deputy chief-of-staff, Vo Van Tuan, told state-run VTV.
"We are not certain where these two oil slicks may have come from so we have sent Vietnamese ships to the area."
Air search operations were halted at nightfall, though ships continued searching, the airline said, adding that no trace of the passenger plane had been found as of late Saturday.
"I think the two oil slicks are very likely linked to the missing plane," Vice-Admiral Ngo Van Phat, who is helping to direct the search mission, told AFP late Saturday.
"However, we have to check carefully once our rescue boats get access to the area," he said, adding the boats were around an hour from the site of the slicks and were expected to search a wide expanse of sea in darkness.
The twin-engine jet had been flying from Kuala Lumpur to Beijing, where anguished relatives were Saturday evening still desperately waiting for news.
The plane had 227 passengers -- including 153 Chinese nationals -- and 12 crew, according to the airline.
An Austrian and an Italian thought to have been on the plane both had had their passports stolen and are safe, officials and family members said.
Italian Luigi Maraldi, 37, was on the passenger list, but phoned home from Thailand to let his family know he was safe -- and before his father had seen the news.
Malaysia Airlines also contacted the Austrian foreign ministry, saying that the name of an Austrian was on the passenger list of the plane, a spokesman for the ministry said.
Austrian authorities confirmed the man was safe in Austria.
- 'My house is a place of mourning' -
At his house in Kuala Lumpur, Hamid Ramlan, a 56-year-old Malaysian police officer, said his daughter and son-in-law were on the flight for an intended holiday in Beijing.
"My wife is crying. Everyone is sad. My house has become a place of mourning," he said. "This is Allah's will. We have to accept it."
MH370 had relayed no distress signal, indications of rough weather, or other signs of trouble, and both Malaysia's national carrier and the Boeing 777-200 model used on the route are known for their solid safety records.
"We are looking at all possibilities but it is too soon to speculate," Malaysian Prime Minister Najib Razak said, when asked whether terrorism could have been a factor.
Authorities would search "for as long as it takes", he said.
The plane's disappearance triggered a search effort involving vessels from several nations with rival maritime claims in the tense South China Sea.
China, Vietnam, Malaysia, the Philippines and Singapore threw vessels and aircraft into the effort, while the US Navy confirmed it had agreed to send planes to help the search effort, including a destroyer and a maritime surveillance aircraft.
Overlapping claims to the South China Sea, a resource-rich, vital shipping lane, have been a growing source of friction between China and its neighbours.
- Contact lost shortly after takeoff -
Contact with the aircraft was lost at around 1:30 am Malaysian time (1730 GMT Friday), Malaysian authorities said, about an hour after take-off from Kuala Lumpur International Airport.
Initially, authorities had put the last contact time at 2:40 am. The new time suggests the jet disappeared closer to Malaysia than first thought.
If the worst is confirmed, it would be only the second fatal crash ever for the widely used Boeing 777. A 777-200 operated by South Korea's Asiana Airlines skidded off the runway in San Francisco last year, killing three people.
Malaysia Airlines also has suffered few safety incidents. Its worst occurred in 1977, when 93 passengers and seven crew perished in a hijacking and subsequent crash in southern Malaysia.
Indonesia-based aviation analyst Gerry Soejatman said a "24-hour golden window" for search and rescue efforts was closing fast.
"You can't assume that there are no survivors, and if there are any, it is absolutely crucial that they are picked up within a day, or the chances of survival drops significantly," he said.
The 153 Chinese passengers aboard the plane included an infant, while 38 Malaysians and seven Indonesians were aboard.
Six Australians, four French nationals, and three Americans including an infant, were also among those listed.
A spokeswoman for the US State Department confirmed three Americans were on board the flight while the Dutch Foreign Ministry said it believed one Dutch passenger was on the plane.
The pilot had flown for the carrier since 1981, Malaysia Airlines said. The plane was more than 11 years old.
- 'We are very worried' -
"This news has made us all very worried," Chinese Foreign Minister Wang Yi said in Beijing.
"We hope every one of the passengers is safe. We are doing all we can to get more details."
The lack of information sparked fury among pained relatives in Beijing.
"They should have told us something before now," a visibly distressed man in his 30s said at a hotel where passengers' families were asked to gather.
"They are useless," another young man said of the airline. "I don't know why they haven't released any information."
A deadly accident would be a huge blow for Malaysia Airlines, which has bled money for years as its struggles to fend off competition from rivals such as fast-growing Malaysia-based AirAsia.
Analysts have blamed poor management, government interference, and union resistance to reform for holding back the airline.