Cakap cakap : And if Umno rid us of these Sultans not only will the people of Malaysia deem it prudent and necessary but, who amongst us would say no? 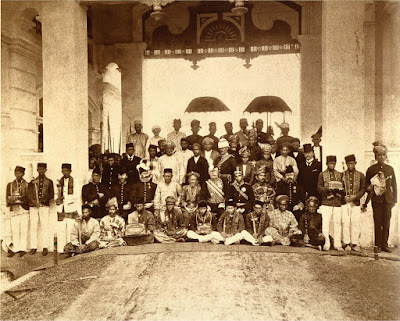 Ahhh yes....the Royals are stirring! They seem to be getting back their aplomb and their swagger...well more swagger than aplomb for what else would you expect after years of inbreeding? Their sense of arrogance, self importance and lack of intellect is there for all to see in the things that they do and the things that they say.

Let it not be said (so the Royals intoned!) that the Sultans are irrelevant and superfluous to the times that we know live in. These royals insists that there has never been a time when the Malays and Malaysians need the Sultan more than the Sultans need them!

Here and there talk about their "daulat" and their "royal prerogative" are being bandied about with relish by some Sultans as they jostle with the politicians to be leader of their rakyat once again.Huh!

Eat the food we eat, do the work we do, live as we live and try living on the wages that we live on...and once you have walked in our shoes then you can say that you know about the aspirations of your own subjects. That you know of their suffering and their trials and tribulations. That you care and that you will be there for them against any tyrant seeking to subjugate them, against any politicians out to use them for their own political advantage and that you will protect them against any corrupt government out to divide and rule them for their own political advancement.
Stay out of politics unless you are prepared to renounce your Royal purse and privileges. If you want to do business do the same thing to - stop being a Sultan, a crown prince or a royal and go do business and compete in the open market unburden by any inherited titles or privilege of birth as we all do.

If you dare not do any of these things then go back behind the walls of the Istana. Back to the life of living off our toil and our sweat. Back to a life of privilege and excesses. Back to a life of awarding Dato's to people who pay you for the privilege of being your Dato and stop pretending or claiming that you are our leader and our champion!

Do you think we not know of what you do now? Even as I write this I know the Sultan of Perak and Selangor should think again about their responsibilities and duties as head of Islam within their own state. Try and live by the tenets of Islam and live with honor and dignity and do not belittle family values and speak with a fork tongue of your devotion to it without being really true to these values.

As for that Crown Prince and  Sultan down south, I have not forgotten the excesses of those Johor Sultans that came before you! Beatings and assaulting your own subjects. Fornicating by the lorry loads and even a murder or two! You are fortunate enough to have "fuck you "money - enough money to tell people to "fuck off" if you dislike what they do. How long before all these wealth are frittered away through a useless life - 300 cars, selling properties  - always money spent but never replenished. Yes you may have enough for a few generations of Sultan..and then what? Money has a habit of vanishing when you do not have the ability to earn it.

First learn to make money before you spend it!

Let us get real! Ignoring the hand of a Minister extended in greetings towards you is a childish thing to do. That was the father. And now the son is asking a Minister to "Bring it on".

Let me tell these two from down South what is the courageous thing to do! Do as Nazri suggests. Go into politics. Go from door to door of the constituents you want to represent. Plead your case with them. Debate with others on maters of state and national interests.Then subject yourself to their votes. Win or lose that would be the courageous thing to do. Challenging a Minister to a fight is childish and without honor.

In all the hype about this crown prince and Nazri let us not forget what the Royals in Johor have been known to do in the past.


Sultan Iskandar is a controversial figure in Malaysia. Appointed Tunku Mahkota or Crown Prince in 1959, he was dismissed from that post in 1961 by his father after being found guilty of assault in the Malaysian courts and sentenced to imprisonment. However, Sultan Ismail relented on his deathbed and restored Tunku Mahmood Iskandar to the succession ten days before the former died. 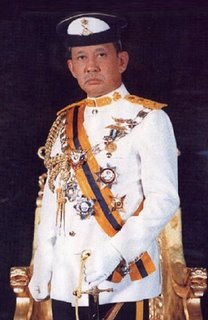 Sultan Iskandar of Johor, a controversial figure in Malaysia

While he was Yang di-Pertuan Agong (King of Malaysia), Sultan Iskandar created further controversy by assaulting and killed a golf caddy. The golf caddy laughed when the Sultan missed a golf stroke, and he was murdered on the spot. The brother of the caddy, a Royal Malaysian soldier, who was badly injured, subsequently ran amok in Kuala Lumpur causing a security scare. The soldier was later arrested and sent to a mental hospital. Tun Dr. Mahathir helped the sultan and nothing happened to the ruler of Johor.

And then, the Johor sultan assaulted a hockey coach and teacher, Mr Douglas Gomez and this sparked a constitutional crisis between the Malaysian government and the Malay Rulers which culminated in the removal of the legal immunity from prosecution of all the rulers in March 1993.


I can go with other misdeeds and abuses of their Royal daulat and prerogatives by other Sultans in the past and even now, but all I will be doing will be urinating against the wind...it will blow back towards me. As a Malay I have been ashamed so many times by the  behaviour of these Malay Sultans but  I think enough said here.

No Sultan have earned my respect nor my trust in the things that they do. No Sultan are in a position to be our leader or our champion in matters political. At most they can add their voices to ours as we tell this Umno led BN government that we have had enough of bad governance and corruption.

This I know the Sultans will not do because when push comes to shove the politicians can take the Royals out in a blink of the eye and banish the Royals back behind the Istana wall to languish in fear that their Royal privileges and purse will be further curtailed if not abolished in perpetuity! As they have done in India!

And if Umno rid us of these Sultans the people of Malaysia will deem it prudent and necessary and who amongst us would say no?
Posted by STEADYAKU47 at Tuesday, June 23, 2015