The above two tweets are from Bung Moktar Radin. Yes the same Bung Moktar Radin who is a Member of Parliament  of Malaysia representing UMNO for the Kinabatangan constituency for Sabah in the Barisan Nasional coalition.

He had once called the late but great Karpal Singh a "big monkey".

And he is the randy old man who pleaded guilty to polygamy when he took a second wife without the permission of his first wife and the marriage registrar and was sentenced to jail for a month for doing so.

He made international news for tweeting "Long Live Hitler" after Germany's 7–1 win over Brazil in the semi-final of the 2014 FIFA World Cup.

Now he can add another "achievement" to his CV. Being "a bloody stupid idiot"!

Let us examine the first tweet:
I am not going to comment on sentence structure because if you really look at this Bung Moktar Radin guy his face and physical self looks like a disaster area! He certainly is not one of God's better work....he is what the British would call a "WANKER", the Australians would call him "BOGAN" ...and the all mean the same thing "BLOODY STUPID IDIOT!" So it is enough that God has "gifted" him with a face only a mother could love ...so we will leave "sentence structure" out of this. 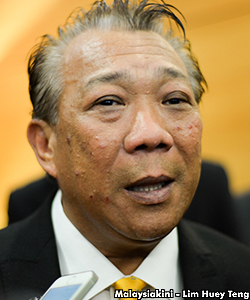 They are three spelling mistake that even a primary school kid would not make!
Remember this guy is a Member Of Parliament!
I am sorry but I do not even know where to begin with this one. "Ladys" when it should have been "ladies" and I am full of sorrow looking the way he used an "o" instead of a "u" for his version of surrounding! He spells it as "sorrounding".

And of course, again, the sentence structure leaves much to be desired. Reminds me of the Indian gardener who swept the back of his Tuan's house and proudly informing his Tuan that he has just sweep the "backside" of the house!

With Members of Parliament like Bung Moktar Radin there is no reason why Pakatan Rakyat should not be in government by the next genral election....opps I forgot there is that Hadi guy in PAS...anyway you can say that it is a level playing field for BN and Pakatan Rakat when it comes to stupidity!