While father was sick and on long medical leave, I had to walk to school. But I had friends living near the government quarters around Tanglin hospital who also attended Batu Road School. 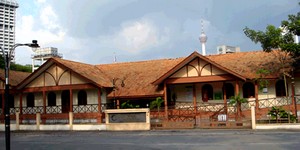 We walked along the north bound railway line, through the pitch dark tunnel that runs beneath Bukit Aman. What we did was, before entering the tunnel (probable length 150 meters), we placed our ear onto the track for any vibrating sound of an approaching train. If there was none it was gung ho time. We ran for dear life into the tunnel for the exit at the other end. There were times when already in, we hear the chugging sound of an approaching train. Along the entire side walls of the tunnel there are indentations cut into the wall like standing coffins. As the train approached, we jump into the coffins until it passed by and scrambled after it. You can imagine what with the cobwebs and soot, the school uniform is a sight. But we never even thought about the danger. In fact we took it as great fun. We mosy along the track till we arrived at the back of the school. We had to cross the stream by balancing across a big piping. My friends were mostly indian boys whose parents worked in Tanglin hospital.

After dad's misfortune, our family brokeup. That sounds devastating. We are sibling of four...Zainon, Azizah, your's truly and the youngest, Ani.

Zainon (Kak Non), was never part of the family. Born during the onset of the 2nd World War in 1940, and being the eldest grandchild, she was cared for by my grand mother - Tok Tina  - so much so when the Japanese occupation was over, Kak Non remained with grandma. We saw her only when we spend school holidays in Kassipillay Kampong where grandmother stayed..

Fast forward to the house in Damansara.

After we moved in and faced reality, it was decided that Kak Jijah be taken in by Teh Munah (that was what we called Maimunah, Tun Ismail's of Bank Negara's wife).

So remained Father, Mother, me and Ani.

A few months later, Pak Anjang (Yaacob Latiff) was appointed as Director, Information Department. We moved to a new house in Swettenham Road. It was a two storey bungalow complete with adjoining servants' quarters. Looking back to those times, he gave us the huge and only room on the ground floor while he and his family occupied the upstairs floor.
From Swettenham Road, the route to school was the same as from Young Road but I did not need to go into any tunnel.

My senior at school was one Mani Jegathasen. During sports day we always commented "lari macam kuda".

I don't remember how Ani go to school. I will ask her one of these days. Tengku Abdul Rahman's official residence was also along this stretch of properties. 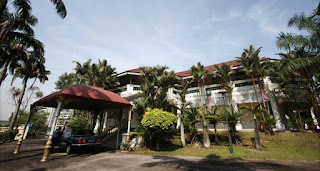 There were quite a number of mangosteen trees in the well trimmed compounds. Once I was apprehended by a gardener while plucking the fruits. I really had to squirm myself out of the situation by begging forgiveness.

Meanwhile father got employed as an Assistant Registrar in the State Registrar Dept. Selangor. With both my parents employed, we took our leave and rented a terrace house in 4th mile Jalan Klang Lama.